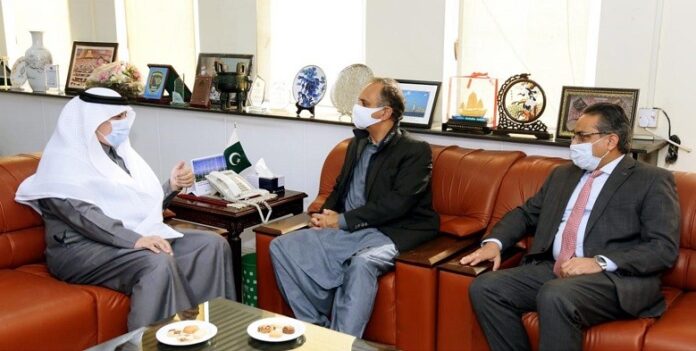 ISLAMABAD: Energy Minister Omar Ayub Khan has said that the government is focusing on energy projects under the new renewable energy policy by harnessing local resources for power generation.

Omar Ayub Khan said this during a meeting with Ambassador of the Kingdom of Saudi Arabia Nawaf bin Saeed Ahmed Al-Malki who called on him on Wednesday.

The minister and ambassador deliberated upon joint ventures between Pakistan and the kingdom in the petroleum and energy sector.

Khan said that revival of exploration and production activities in the oil and gas sector would attract investment in the country. He also apprised the envoy of the progress on various energy projects in lieu of investment-friendly policies introduced by the incumbent government in diverse fields of economy.

“A diversified energy market is one of the most lucrative investment destinations that could lead to rapid economic growth,” he observed.

The ambassador stressed that the kingdom would continue to work with Pakistan in order to strengthen bilateral relations between the two brotherly countries.

The minister said that Pakistan will operate two flights per week to the Saudi city of Abha, which will further strengthen bilateral relations and promote tourism between the two countries.

Ghulam Sarwar Khan also termed the restoration of ties between Saudi Arabia and Qatar as a positive development for regional peace and security.

The Saudi ambassador hailed the steps taken by Pakistan to check the spread of Covid-19.