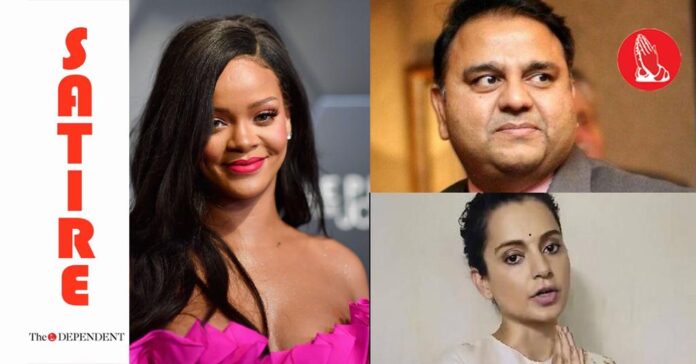 ISLAMABAD: Federal Minister Fawad Chaudhry has copied all of the talking points of Bollywood actress Kangana Ranaut against international pop star Rihanna after the latter had spoken out in favour of the protesting farmers in the Indian capital.

“Yes, I wrote a tweet appreciating Rihanna but one should always be prepared for all possible eventualities,” he said, speaking to The Dependent. “She might enjoy this and move on to something about the Uighurs, PTM, Baloch or our religious minorities.”

His views were echoed by Haier Industries CEO and Peshawar Zalmi franchise owner Javed Afridi. “Yes, I asked the people whether we should make her sing the next Zalmi anthem. But damn, a song with some token Pashto words and then she tweets support to Mohsin Dawar and we’re up sh*t creek. And by ‘we’, I mean me. I’ve seen what these guys can do.”

Till the filing of this report, a government search committee had narrowed down a possible attack on Rihanna to the slut-shaming, racism and general misogyny categories.