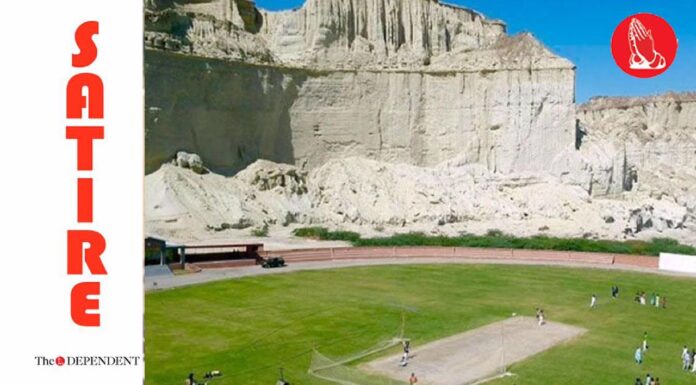 GWADAR/BEIJING – The Senator Muhammad Ishaq Baloch Cricket Stadium Gwadar, being praised by the world including the International Cricket Council’s social media handle for its picturesque beauty, will be the official home ground of China’s international cricket team, The Dependent has been informed.

The stadium, inaugurated by Balochistan Chief Minister Jam Kamal in November, and built by the provincial government and Pakistan government under the auspices of the Chinese government, will first be the principal training ground for Chinese cricketers in order to help develop their national side, it has been further learnt.

“We are confident that China will soon be the top ranked team in international cricket,” Pakistan Cricket Board (PCB) Chairman Ehsan Mani said while talking to The Dependent.

“And by that I mean top of ICC rankings in all three formats—Tests, ODIs and T20Is and may be some other formats that the Chinese are sure to create and enforce upon the world once they start giving a damn about cricket,” he added.

Mani further confirmed that the Senator Muhammad Ishaq Baloch Cricket Stadium Gwadar will be renamed after “some Chinese athlete or autocrat”.

The PCB chairman also hailed it as “yet another remarkable achievement of the China Pakistan Economic Corridor (CPEC).”

“Clearly, CPEC isn’t just a game-changer for Pakistan, but for China as well,” he said.

The PCB has further confirmed that the Pakistan Super League (PSL) will be renamed next year as CPEC Super League (CSL), and will feature a Chinese franchise in season seven in 2022.

By the year 2030, CSL is expected to feature a total of 34 Chinese franchises representing 23 provinces, five autonomous regions, four municipalities directly under the Central Government, and two special administrative regions, in addition to six Pakistani teams.

The first match to be contested at the Gwadar stadium will be between Beijing and Balochistan.