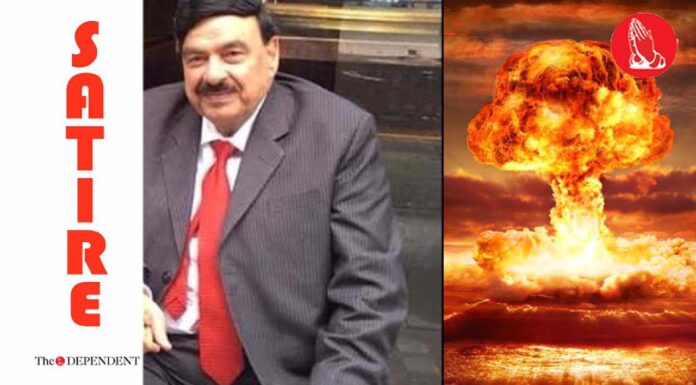 Addressing a ceremony in Rawalpindi on Tuesday, he said it was only because the country under the current Pakistan Tehrik-e-Insaf (PTI) regime is now a welfare state that the capital’s police “fired a little tear gas”, adding that being a nuclear power the state could also have deployed the atom bomb.

“Only a little [tear gas] was tested, not a lot,” Rashid claimed. “We could’ve done the same with the nuclear bomb – you only need to use a little of that any way.”

Rashid further maintained that half-way through its term, the incumbent government had already transformed Pakistan into a welfare state, and last week’s development, and the weapon potential of the country, should continue to remind any potential protestors how privileged they are to be a part of this land.

“Any other nuclear state would’ve done it. Testing the atom bomb in inhabited areas isn’t sufficient. You need some form of the human specimen to examine the impacts of nuclear blasts,” the interior minister said.

“So the next time you think you need to come out to the street for your demands—whatever demands that might be—keep it in mind that we are a nuclear-armed welfare state.”