After formality of letter to Imran, Modi pens detailed message for ‘Real Excellency of Pakistan’ 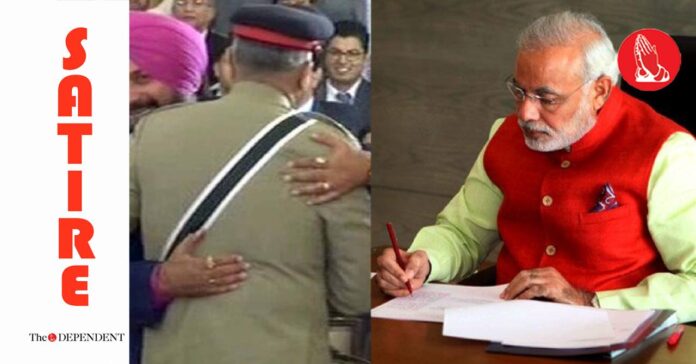 A copy of the detailed letter, delivered immediately after the letter to Khan was sent by the Indian High Commission in Islamabad through the Foreign Office, is available exclusively with The Dependent.

It has been further learnt that the message to the Real Excellency was delivered via backdoor channel under the supervision of Congress leader Navjot Singh Sidhu, who has recently drawn close to Pakistan’s Real Excellency.

“Real Excellency, I’m sorry I had to go through the formality of writing to Imran Khan, when you and I should be directly, and openly, conversing. But you know how it is. I am sure it must be annoying for you as well that you have to pretend that he’s the head of the government. Lolz,” began the Indian premiere’s letter.

The Prime Minister of India conveyed that the letter to PM Khan was sent from Abu Dhabi, and was translated from the original Arabic.

“Real Excellency, I did not even read the original or the translated version LMAO! As you know it hardly matters. What matters is this communication between us, and hence I’m writing this heartfelt letter straight from the heart, with the help of my oversized digital media and content writing team,” wrote Modi.

“Real Excellency, let me tell you that I was absolutely moved by your speech from last week where you expressed a desire to put your own house in order, a house that I had the good fortune of visiting in 2015 <3. You said let’s bury the past, and I reassure you that I’m ready to bury it all. In fact, I would’ve loved to have said this on video as well like you, but my Bhakts can be a bit touchy. So let’s stick to texting for the time being ;)” the letter added.

In the long and thorough reconciliatory letter, PM Modi conveyed to Real Excellency that the two of them could resolve all remaining issues in the region and win the joint Nobel Peace Prize.

“It is meant for us, the two of us, the two Excellencies, the two Prime Ministers, to win the Nobel Peace Prize together xoxo” the Indian PM said.

At press time, the Real Excellency was replying back to the long text, using references from recently received letters in Arabic and Chinese, along with a detailed voice note in Philadelphia English delivered in tangible Pennsylvanian accent.