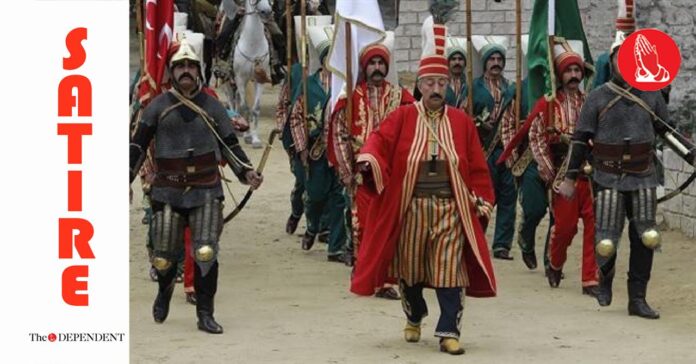 ISLAMABAD: The grand military parade held on Thursday in connection with Pakistan Day celebrations in Islamabad at Parade Ground near the Shakarparian hills has commemorated the role of Ertugrul Gazi in the War of 1965.

In this connection, a Turkish military band played the famous Turkish theme song, followed by Dil Dil Pakistan, as the patriotic anthems echoed around the Parade Ground.

The parade’s commemoration of the role of Ertugrul Gazi, who according to tradition was the father of Osman, the founder of the Ottoman Empire, was complemented by the military announcers narrating the great warrior’s participation in the 1965 and 1971 wars, and how Ertugrul helped Pakistan triumph.

“Along with angels, it was the founding fathers, and grandfathers, of the Ottoman Empire that helped tilt the balance of the war in Pakistan’s favour in 1965, and the nation overcame the odds and defeated the larger and stronger army of India,” bellowed the announcer.

“It was one of the greatest tank battles since World War II, and also the first time in human history that an army on horses and swords defeated an army full of tanks. The war was fought simultaneously in South Asia during the Cold War dominated latter half of the 20th century and the border of the Byzantine empire in the middle of a fictional depiction of events east of the Roman Empire in the 13th century,” the announcer added.

The participants, the crowd, and audiences watching the parade at home on their TV sets were further reminded of the direct role Ertugrul had defending Pakistan in 1965.

“Ertugrul Gazi and his army helped prevent Indian generals from entering Lahore, with Ertugrul himself guarding the mess of Gymkhana Lahore to ensure that no infidel could have tea or breakfast there,” the announcer said.

“Therefore, Defence Day is really Diriliş Day, Republic Day is really Ertugrul Day, and the Islamic Republic of Pakistan is really an Imaginary Rendition of the Ottoman Empire.”