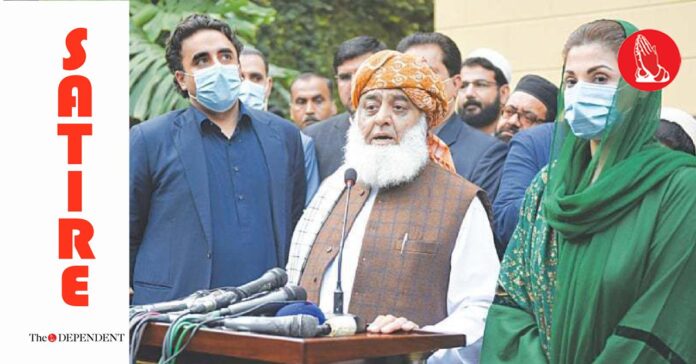 ISLAMABAD: The opposition alliance Pakistan Democratic Movement (PDM) has decided to part ways and has split into Nazariyati and Zarooriati factions, The Dependent has reliably learnt.

While it remains unclear at the time of writing which of the two factions is PDM-N and which one PDM-Z, selectively anti-establishment observers suggest that the suffixed alphabets N and Z—or noon and zuad in Urdu—might be revealing.

However, investigation by The Dependent into both factions revealed that both PDM-N and PDM-Z self-identified as nazariyati but were in fact more aligned with zarooriyati politics.

“Both are de jure nazariyati and de facto zarooriyati,” commented a member of a constituent party of the erstwhile PDM, which is mulling yo-yoing between the N and Z parties, given that the two factions are themselves unsure which one’s which.

Meanwhile, The Dependent has further learnt that despite the actual identity of PDM-Nazariyati still unclear a faction within the faction calling itself ‘Sheen’—or S in English—is emerging, generating veritable noise for the creation of a PDM-Shiraarati.

“The mix achaar party might have rebranded and split into two different jars, but the noon jar will further create a sheen jar,” predicted Punjab Minister of Prisons Fayyaz-ul-Hassan Chohan, while talking to The Dependent.

At press time, the disintegration of PDM had escalated with sources confirming the possibility of further fragments being created calling themselves Tassawuraati, Haadsaati, Hichkichaati, Dagmagaati and Sair-Sapaati based on whether they are imaginary, accidental, hesitant, stumbling or just roaming around while actual power brokers make the decisions, respectively.