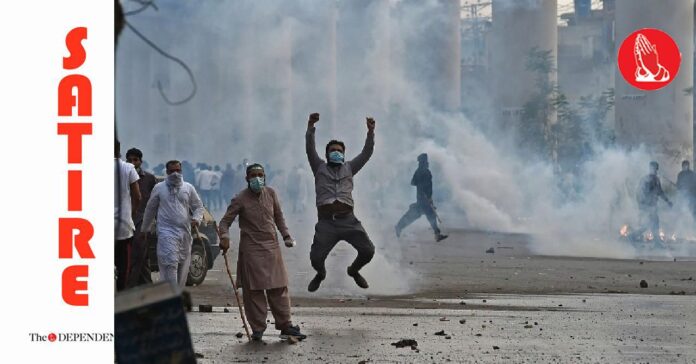 LAHORE: Moments after the government decided to ban Tehrik-e-Labbaik Pakistan (TLP) after nationwide violent protests this week, the group has announced that like other banned organisations it will reemerge under a new banner.

“This is a fitting tribute to my father Khadim Rizvi, who made TLP an international brand. Now ‘Lo Gi Ghauri Aya Fir’, a phrase now associated with the great man, will hope to build on that,” Saad Rizvi told The Dependent.

The TLP chief said that it is following a long list of illustrious groups that renamed themselves after being banned in Pakistan, often enhancing their outputs and productivity after the bans.

“Lashkar-e-Taiba, Sipah-e-Sahaba Pakistan, just to name a couple. We might have ideological disagreements with many of them, but a successful enterprise always respects those who have done well in the same industry and business,” Rizvi maintained.

The TLP chief said that it already had a superstructure in place to form charities and political organisations that will help LGGAF flourish.

“The next aim is to get LGGAF banned in a couple of years to further multiply the outreach and success of the TLP brand.”

Assistant Commissioner Sialkot (city) Sonia Sadaf, was disappointed to wake up in the wee hours of Monday morning from a dream in which she...
Read more
NATIONAL

ISLAMABAD/BAGHDAD/RIYADH/TEHRAN: Pakistan has witnessed yet another diplomatic success as the country continued with its long-held position of mediating talks between Saudi Arabia and Iran....
Read more
NATIONAL

RAWALPINDI: After the interior ministry issued a notification for the number one deployment to enforce standard operating procedures (SOPs) for curbing the spread of...
Read more
- Advertisment -