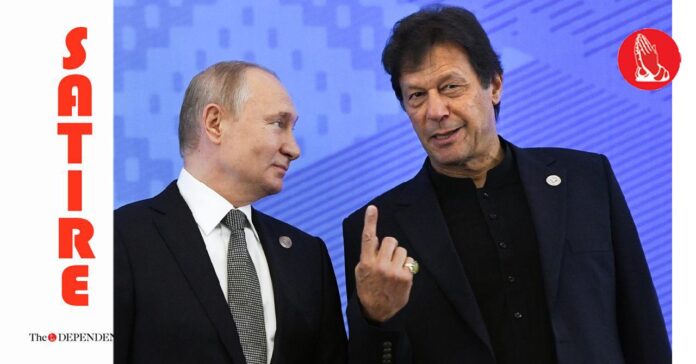 ISLAMABAD: During Russian Foreign Minister Sergey Lavrov’s visit to Pakistan earlier this month, which was undertaken after nine years, he delivered an “important” message to the Pakistani premier. It was a special message that he delivered on behalf of President Vladimir Putin.

“I came with a message from my president that tells Imran we are open for any cooperation, whatever he needs Putin is ready for it,” the Russian foreign minister was quoted by a senior Pakistani official, who attended the closed-door meeting between Lavrov minister and Pakistani authorities, as saying.

The official revealed that Putin had conveyed to Pakistan Prime Minister Imran Khan through his top diplomat that he would help him in any manner. “If you’re interested, I am ready for it,” the official quoted FM Lavrov as saying on behalf of Putin, when asked what he meant by “blank cheque”.

Following the reports of the blank cheque being leaked in the media, Foreign Office has issued a clarification underlining that it was actually a blank piece of paper with the Russian president’s number on it along with the message ‘Putin <3 Immy’.

“The blank paper had the Russian president’s number with lots of hearts and a message ‘Call Me XoXo’ written on it,” Foreign Office (FO) Spokesperson Zahid Hafeez Chaudhri told The Dependent.

Chaudhri further revealed that it was a prank played by an FO official on Prime Minister Imran Khan, with investigation underway to find the culprit.