Will liberate Palestine from Israelis after liberating school from Hashmis, say custodians of ideological frontiers 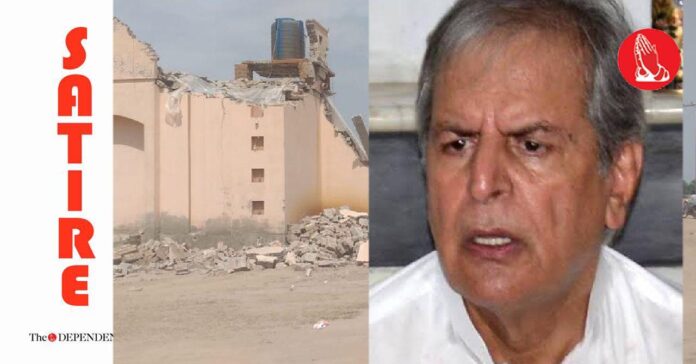 SMACK WITHIN IDEOLOGICAL FRONTIERS: The custodians of the nation’s, and by extension, the ummah’s, ideological frontiers on Monday confirmed that they do plan to liberate Palestine from Israelis, but it will have to wait till schools, hospitals and houses in Multan are liberated from the Hashmis.

The stooges of the stooges of the custodians of the ideological frontiers delivered the message categorically, in turn reminding the nation that they should be silent and let the number one forces deal with its current priorities till Palestine becomes a priority, lest the critics wanted themselves to become a priority.

“Of course, we will free Palestine. We will first free Kashmir, which of course is our first priority and then Palestine. Meanwhile, put your hands up and free your pockets,” a custodian of the ideological frontiers said while frisking this scribe for any arsenal. A pen was duly discovered and destroyed, with this scribe fearing for a similar freedom of the laptop bag.

Senior custodians, while talking to The Dependent, further confirmed that a new jingle and a housing society will be dedicated to Palestine.

“For the jingles we need a hike in defence budget to find a dedicated musical corps, ideally multiple to cater to various genres. Similarly, for the housing society, we need to add more land. By the way, where do you live?” asked a custodian with incisive ideological clarity.

At press time, the custodians were focused and channelising their resources on liberating more Multan buildings from the Hashmis.