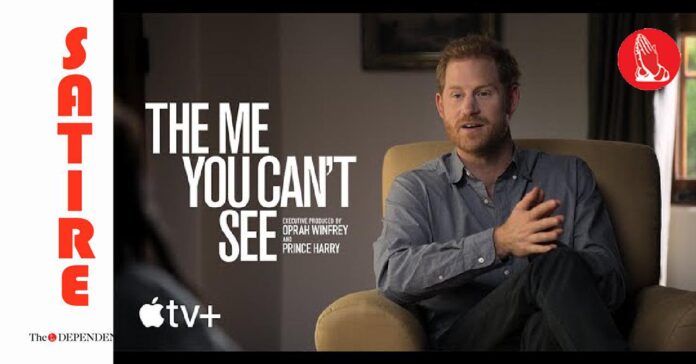 SANTA BARBARA: After their two-hour emotionally invigorating CBS interview in March, where the plight of the world’s most marginalised pair of human beings was laid bare in front of the shocked eyes around the globe, Oprah Winfrey and Prince Harry, the Duke of Sussex, have a new documentary series together on Apple TV+ called The Me You Can’t See.

The series reveals how Prince Harry and Meghan Markle, the Duchess of Sussex, were living under the gruesome occupation of the British royal family.

“Meghan and I were living under veritable occupation perpetuated by the royal family. It was gory and brutal totalitarianism inflicted on a people deprived of their fundamental right to life — a life of their own choice,” reveals Prince Harry in the documentary.

The Duke of Sussex also elaborated that what he and the Duchess experienced in the Buckingham Palace was actual apartheid.

Oprah tells viewers that she “hopes people find themselves in this story, in the vulnerability and plight of the couple.” Prince Harry responds with a similar desire.

“Yes, I hope people out there can relate to the denial of human rights faced by the members of a centuries-old monarchy. And how the millions we continue to make by virtue of being part of, and occupied by, that monarchy can’t undo the horrors of the occupation.”

BAHRIA BASES, BAHRIA TOWN TORKHAM— The Central Intelligence Agency (CIA) is finally on the verge of getting airbases to host the US drones in...
Read more
World

The White House said on Thursday that reports of a move toward a ceasefire in Gaza were encouraging, even as Israel threatened to step...
Read more
Top Headlines

Civil society and political parties in not just Pakistan but also the 40 other member states of the multinational military alliance of Muslim countries...
Read more
Top Headlines

WASHINGTON/TEL AVIV/JERUSALEM – US President Joe Biden said Saturday that Israel has a right to defend itself from ballistic videos and images of Palestinian...
Read more
Top Headlines

Israel has announced on Monday plans for making further settlements on the wrong side of history.   “Yes, these new settlements are further continuation of our...
Read more
- Advertisment -