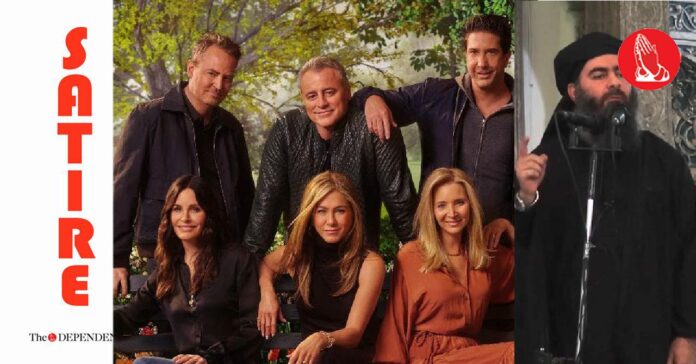 LOS ANGELES/BERISHA: Former chief of the so-called Islamic State of Iraq and Syria (ISIS) Abu Bakr al-Baghdadi will be making his first public appearance since his death in the upcoming Friends: The Reunion show — and we can’t help but swoon!

Al-Baghdadi, who died his latest death on October 27, 2019, has been keeping a low profile, spending most of the recent time on his own, experiencing breaking away of molecular structures, tissues collapsing into a watery mush and a more generic autolytic decomposition for the past year-and-a-half.

He will soon be seen joining Ross, Rachel, Chandler, Monica, Joey and Pheobe telling us all, “I’ll be there for you!”

“I mean we have Justin Bieber, Lady Gaga, BTS, and so many others. But al-Baghdadi stole the show!” Friends: The Reunion Director Ben Winston told The Dependent. “And then asked the jury to chop his hands off as punishment — that’s my favourite bit from the show. Oops, spoiler alert!”

Sources within the production team further confirmed that the show, which is set to air on Thursday, May 27, will see al-Baghdadi reveal how Friends was the motivation behind so many ISIS jihadists wanting to blow up the US in the first place.

“Warner Bros is already working on roping in Osama bin Laden, Mullah Omar and Hakimullah Mehsud, for a J.I.H.A.D.I.S.T.S reunion along with al-Baghdadi,” revealed a Warner Bros producer while talking to The Dependent.

“In fact, it was Warner Bros who killed [Boko Haram chief] Abubakar Shekau last week to cast him in time for the reunion.”

BAHRIA BASES, BAHRIA TOWN TORKHAM— The Central Intelligence Agency (CIA) is finally on the verge of getting airbases to host the US drones in...
Read more
World

SANTA BARBARA: After their two-hour emotionally invigorating CBS interview in March, where the plight of the world’s most marginalised pair of human beings was...
Read more
Top Headlines

The White House said on Thursday that reports of a move toward a ceasefire in Gaza were encouraging, even as Israel threatened to step...
Read more
Top Headlines

Civil society and political parties in not just Pakistan but also the 40 other member states of the multinational military alliance of Muslim countries...
Read more
Top Headlines

WASHINGTON/TEL AVIV/JERUSALEM – US President Joe Biden said Saturday that Israel has a right to defend itself from ballistic videos and images of Palestinian...
Read more
Top Headlines

Israel has announced on Monday plans for making further settlements on the wrong side of history.   “Yes, these new settlements are further continuation of our...
Read more
- Advertisment -