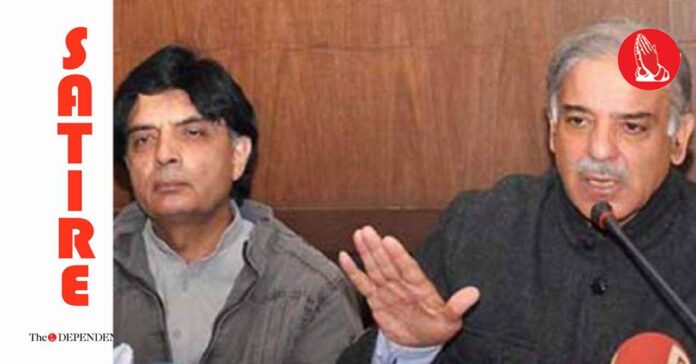 ABOARD PA-200: The couple caught expressing passionate affection for one another on AirBlue’s PA-200 flight from Karachi to Islamabad, in turn shaking up the nation and its headlines, have been duly identified as Lahore-based Shehbaz Sharif and Chaudhry Nisar Ali Khan from Rawalpindi.

The Dependent, which is the leading source of information on the nation’s basic instinct, has revealed via the presence of its investigative correspondent on board the same flight that Shehbaz and Nisar were the ones who were given the blanket by the AirBlue hostess to hide their public display of affection.

The Dependent, with a proven record of invading privacy and capturing unsolicited footage, has recorded the two expressing their love for another, with further nosiness of our correspondent unearthing that their love faces certain hurdles.

“Please don’t show this to my elder brother,” Shehbaz told the correspondent while the video was being recorded.

Further invasion of privacy has revealed that Shehbaz’s family is against Nisar despite the latter being a family friend for decades. Shehbaz wants Nisar to win back the Sharif family, but Nisar is a ‘high maintenance snob’, sources who should be minding their own business revealed.

The intrusive investigation has further revealed that the elder brother of Shehbaz, one Nawaz Sharif, actually broke up with Nisar, even thwarting repeated efforts to work on something long-distance.

“What are you doing? This is Shahid Khaqan’s airlines!” Nisar is seen reminding Shehbaz in the footage recorded by The Dependent.

The Dependent will keep the nation posted on the captivating love triangle, and if it evolves into other polygons.

Chief of Air Staff Zaheer Ahmed Babar’s home village of Sidh, Gujrat was retrospectively declared a forward operating base on Tuesday and his much...
Read more
NATIONAL

ISLAMABAD: Pakistan Muslim League-Nawaz (PML-N) General Secretary Ahsan Iqbal has asked selectors to have some heart and give an honest answer with regards to...
Read more
NATIONAL

RAWALPINDI – Following the landmark decision allowing overseas Pakistan the right to vote for the National Assembly, further history is set to be made...
Read more
NATIONAL

ISLAMABAD – The federal cabinet has approved an expansionary fiscal policy that offers little for defence but gives away more than half of the...
Read more
- Advertisment -