After asking India hockey team to win Gold, SRK asks Madan Chopra to give him power of attorney 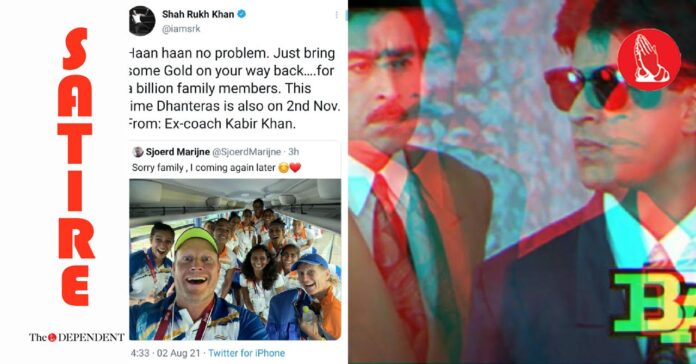 MUMBAI: After motivating the Indian women’s hockey team to win the Olympic Gold Medal as their ex-coach Kabir Khan on Monday, Bollywood superstar Shah Rukh Khan went on to ask Chopra Textile and Industries Owner Madan Chopra to hand over power of attorney to him as Vicky Malhotra, The Dependent has reliably learnt.

Meanwhile, sources further confirm that in between the communications with the Indian hockey team and Madan Chopra, SRK Monday also asked Gurukul’s principal to open the gates to love, friendzoned Anjali Sharma and then married her, pretended to save Kuljeet Singh for Simran Singh’s sake, and died and reincarnated with his brother Karan upon the call of their mother.

Sources confirm that SRK’s Monday exchanges continued until he got in the middle of a family feud between Ravi Pratap and Dhirendra Pratap, ending up marrying Kajal.