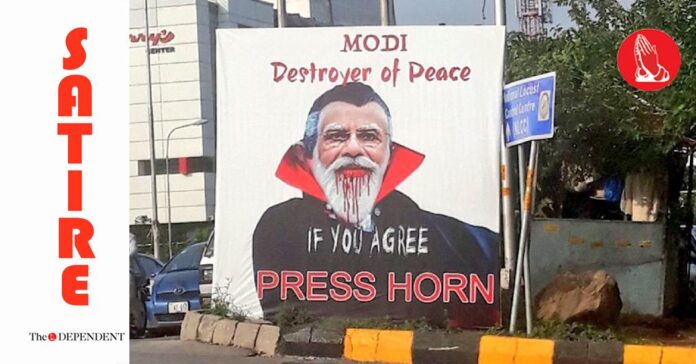 ISLAMABAD – Having been given a prolonged sabbatical by their employers at Aabpara, many workers of multinational franchises Lashkar-e-Taiba (LeT) and Jaish-e-Muhammad (JeM) were seen honking horns in from of the diplomatic enclave on Thursday.

Participants of this critical exercise assigned late Wednesday night told The Dependent that cars were hired and given to them to drive through the specified area throughout the day on August 5.

“This is the most productive we have been for over two years,” said a JeM employee while talking to The Dependent.

A senior LeT operational manager, privy to the designing of the exercise, and in-charge of its execution told The Dependent that the plan was actually conceived a year ago.

“The reason it was shared with the operatives so late was to keep the enemy in the dark,” he told this scribe.

“I’ve led many LeT and JeM operations in the region in the past, but I can assure you nothing has been this exciting.”

Another senior JeM executive, while incessantly honking confirmed that everyone was on the same page with regards to the plan of action.

“It’s all about grabbing the bull by the horns,” she said with his hand on the horn and this scribe on the backseat.

“We couldn’t liberate Kashmir with various minutes of silence. We are confident that we’ll do it with honking.”

At press time, a man wearing a red hat was seen repeatedly circling the square near the diplomatic enclave on a horse, honking a hand-pump air horn.