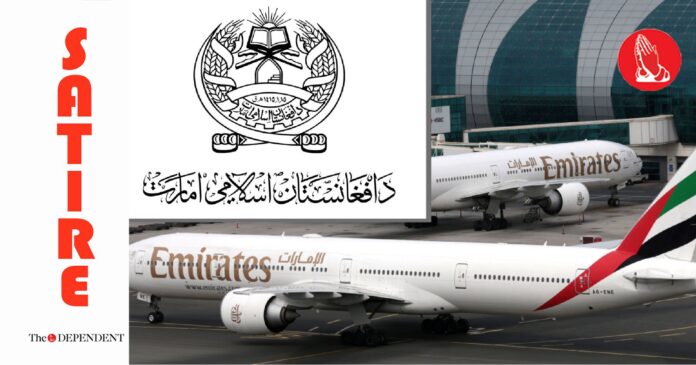 DUBAI: The naming rights of the 38-million capacity theatre, informally known as things stand as the Islamic Emirate, have been granted to Emirates Airlines.

Immediately following the agreement, the United Arab Emirates confirmed that it had recognised the Taliban government, making it the first country to do so.

“The UAE Ministry of Foreign Affairs and International Cooperation can confirm that the UAE has recognised the Taliban government in the Emirates Airlines Islamic Emirate of Afghanistan,” the UAE foreign ministry said in a statement.

The foreign ministry officials confirmed that agreement with the Taliban government in the Emirates Airlines Islamic Emirate of Afghanistan has been finalised and the country will formally unveil its new complete name and flag with the Emirates logo on it.

The Dependent has further learnt that in addition to recognising the Taliban government, the UAE has also offered over $1 billion (AED 3.67 billion) in payment for the naming rights, as part of a five-year deal.

Sources within the UAE foreign ministry have further revealed that they are working with the government of the Emirates Airlines Islamic Emirate of Afghanistan to reconcile with other jihadist groups in the region to form a formal united front.

“We’re hoping to get the naming rights for that jihadist alliance for Etihad Airways,” said a ministry official.

Prime Minister Imran Khan said in an interview with CNN on Wednesday that there were way too many members of the Kakulia tribe living...
Read more
NATIONAL

PESHAWAR/ISLAMABAD: The proscribed Tehreek-e-Taliban Pakistan (TTP) has issued a stark warning to the entire nation via the media and journalists, asking them to refrain...
Read more
NATIONAL

ISLAMABAD: Most of the aficionados of the Netflix blockbuster La Casa De Papel, or Money Heist, would have already seen the first half of...
Read more
NATIONAL

LAHORE: In a follow-up joint statement issued by outgoing coaches Misbah-ul-Haq and Waqar Younis, the duo have confirmed the real reason behind their sudden...
Read more
- Advertisment -

Will definitely apply for a job with PCB because they keep...

September 17, 2021
LAHORE – Cricket legend and outgoing bowling coach of the national team, Waqar Younis, has confirmed that he will apply for the next coaching...