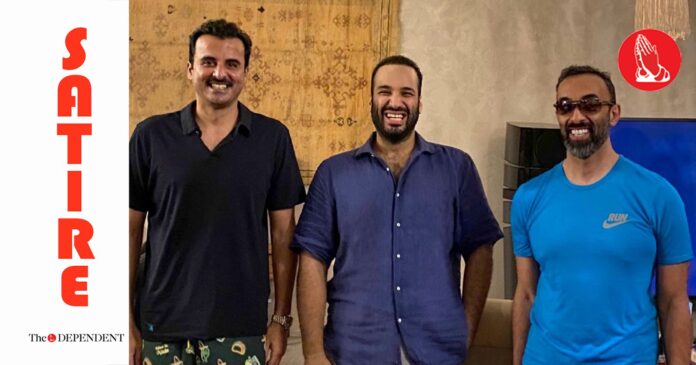 The picture, which has now been shared widely across news publications and social media in a more regional geopolitical context, was first a postcard sent to Pakistan as a message of appreciation for continuing to do the work of the Arab monarchs even after they’ve stopped doing it themselves.

“An age-old ideological investment is continuing to bear fruit in Pakistan. We are grateful for the believers in this divine ideology, but especially to those who don’t believe in it — at least not to the same extent,” reads part of the postcard, a copy of which is available exclusively with The Dependent.

“We especially appreciate the many among the liberals and the left for defending imperialistic and sexist modesty codes that we proliferated. We can’t imagine them defending any other tools and ideas that represent gender disparity or colonial imposition, except for the ones spread through this one particular religious ideology.”

The NextGen Arab leaders were especially appreciative of how the current generation of progressives is using modern-day sensibilities to defend archaic values.

“Those seeing everything as the fault of Western imperialism are defending Arab and religious imperialism. Those critical of the social impact of religious fundamentalism are endorsing fundamentalist exhibits. Those asking men not to comment on women’s clothes defending millennium-and-a-half-old male enforced doctrines for women as supreme and infallible…”

The postcards also underlined the effort put in by many in the liberal intelligentsia to refuse to differentiate between upholding the right to a choice, and endorsing the choice itself.

“You would think those vowing to shatter patriarchy and unpack gender discrimination would be able to criticise a code that not only distinguishes between men and women, but clearly differentiates among women themselves, linking their worthiness to their clothing,” the postcard says, acknowledging the difficulty level in performing this task for liberals.

“But we NextGen Arab leaders really appreciate your contributions towards uplifting the structures founded by our ancestors, decades and centuries ago. We might be undoing these divinely mandated codes ourselves, out of our own interests, but a regressive, fundamentalist, religiously shackled Pakistan would always be in our best interests.”