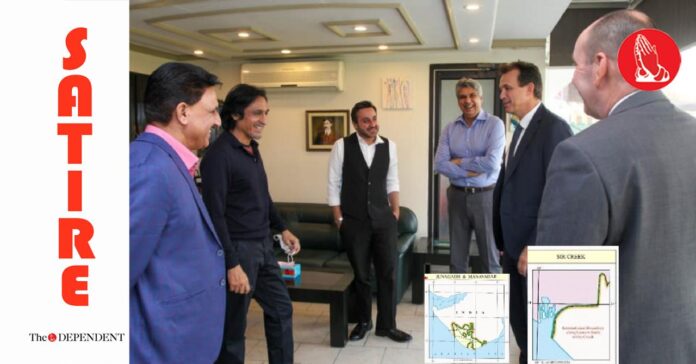 LAHORE: England Men’s Cricket Team has offered to play two more T20Is on their tour in September and October 2022, agreeing to formalise the accession of Junagadh and Sir Creek to Pakistan, in compensation for the late cancellation of last month’s planned visit.

The offer was made by England and agreed on by Pakistan, following a meeting between the English and Wales Cricket Board (ECB) and the Pakistan Cricket Board (PCB) officials in Lahore on Tuesday.

Tom Harrison, the ECB chief executive to hold talks with PCB Chairman Ramiz Raja, confirmed that the ECB had been granted the authority by the United Kingdom parliament to offer the princely state of Junagadh, and Sir Creek, which defines Pakistan’s maritime boundary, to the PCB, which in turn is expected to pass it on to the Pakistani government.

“I visited Lahore to talk face-to-face with the PCB around some of the things that have happened over the past few weeks, and well the past few centuries,” Harrison said in a statement.

“We also wanted to discuss the future as the two boards, and the two realms, have a historic relationship and want to move the agenda towards a forward-looking one as opposed to one looking back — whether to September 2021 or to August 1947.

“This is just to reaffirm our commitment to Pakistan, and ensuring that cricket teams, and disputed territories, return to the country as soon as possible.”

- Advertisement -
Facebook
Twitter
Linkedin
WhatsApp
Email
Previous articleGovt negotiating with ASWJ on number of policemen they have to kill in order to be unbanned: Fawad
Next articleYouth should be encouraged to take murder blame for employer who will then leave them fortune after killing himself, say personal finance experts