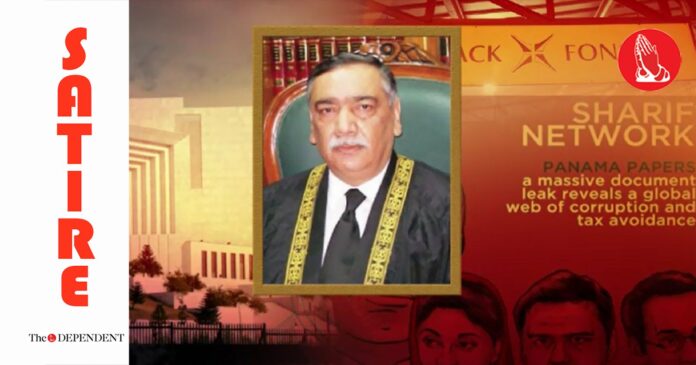 ISLAMABAD: Another audio leak has hit Pakistan’s embattled judiciary with a damning recording of former Chief Justice of Pakistan Asif Saeed Khosa, The Dependent can confirm. Asif Khosa, who headed the five-member bench that disqualified former Prime Minister Nawaz Sharif in 2017, can be heard in the audio leak saying, “Well, of course, I haven’t actually read The Godfather!”

The audio, available exclusively with The Dependent, has been revealed by Fiction Focus, an organisation that unveils the names of those who claim to have read fiction that they actually never have. Asif Khosa will be named in Fiction Focus’ next edition, set to be published in December, unveiling the names of high profile individuals lying about the books that they have read.

In the leaked audio, Asif Khosa can be heard discussing Mario Puzo’s ‘The Godfather’ with an unidentified individual on the other side of the call, confessing that even the person who wrote the verdict in 2017 hadn’t read the book.

“Even the person who wrote the verdict told me that he hadn’t read the book. He said he’d watched The Godfather movies. I’ve watched one of them as well, I think, not sure which one, and pretty sure I fell asleep in the middle,” Khosa’s voice can be heard as saying in the audio leak.

The former chief justice also confirmed that The Godfather isn’t the only piece of fiction that he boasts about hasn’t actually read.

“I haven’t even read the Panamagate verdict!” he exclaims in the video that will accompany Fiction Focus’ revelation next month.

“If they make a movie on the case, I might consider watching it though,” Khosa’s voice says at the end of the audio.