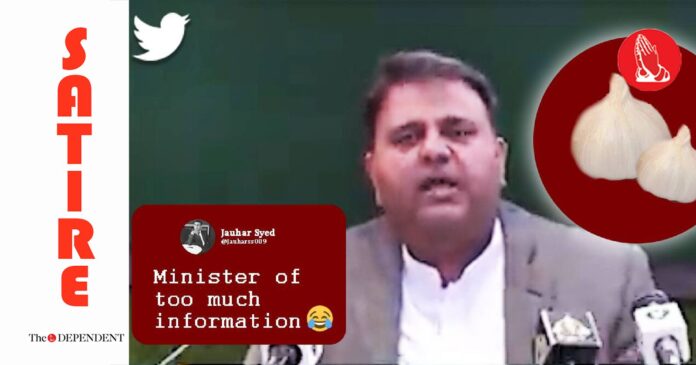 ISLAMABAD: Deeming those voicing their critique as ‘hopelessly desperate’, Federal Minister for Information and Broadcast Fawad Chaudhry Wednesday responded to the backlash that he has been facing for calling garlic ‘adrak’, by reminding his critics that the gaffe won’t even make a shortlist of the most ridiculous things that he has said.

Calling an emergency press conference Wednesday morning to clarify his position, Chaudhry said those who are criticising his mix-up of words, and those who are blindly following his political opponents, are ‘two peas in a pod’.

“Peas matlab moongray,” Chaudhry said in a bid to further enlighten the journalists present in the emergency media briefing.

“And pod as in iPod. You can’t listen to music on an iPod by using moongray as earphones,” explained the minister, who previously served as the minister of science and technology.

Further elaborating the purpose of the press conference, Fawad Chaudhry said that mixing ‘adrak’ and ‘lehsan’, or ginger and garlic, was an honest a mistake as any.

“Which is much more than what can be said about the many other mistakes that I’ve made as a politician and journalist,” he maintained, adding that he even immediately corrected himself after asking those around him, which is something he has never done while saying the more impactful and meaningful stupid things.

“If you started counting all those, I’m pretty sure mixing up ginger and garlic won’t even make the top 1000 list. This only goes to show the malicious intent of those aboard the bandwagon, dangling a carrot to lure others,” he added.