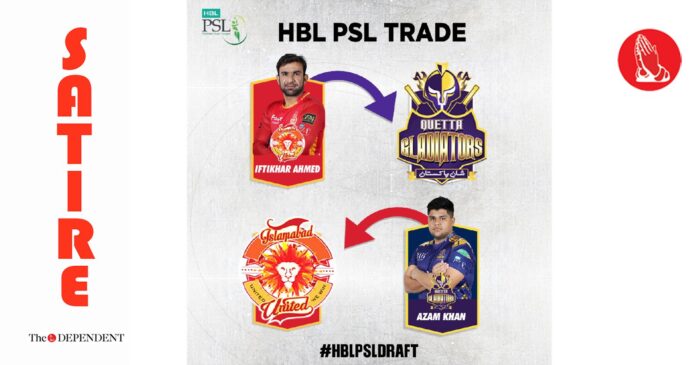 United, the two time PSL champions delivered the ageist joke, while the 2019 champions Gladiators duly responded with a fat-shaming joke.

Analysts maintain that the trade was equally balanced and has provided more balance to both sides’ respective repertoire of jokes.

“After two disappointing seasons, Quetta Gladiators needed to punch above their weight. For that either they had to go up or the weight had to come down,” noted Bazid Khan leading expert on misdirected jokes.

While experts have lauded Quetta’s record in addressing fat-shaming jokes, including at the top of the hierarchy, analysts have also observed that the squad was now entertaining sexist jokes.

“But it’s for one last time for all of PSL,” said a member of the Gladiators think-tank.

Meanwhile, Islamabad United’s tech-savvy, data-sciencing, think-tank has expressed joy over the trade, saying they are now consulting AI generated algorithms to figure out which punches would have more impact.

“In terms of matchups, especially in the context of sport, we feel fat-shaming has the obvious edge over ageism,” said a member of the United management team.