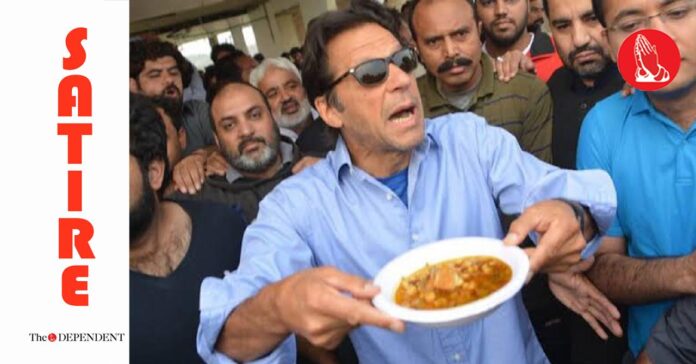 ISLAMABAD: Prime Minister Imran Khan has asked the Higher Education Commission (HEC) to fund a research on how Pakistan’s hunger and poverty are directly linked to the presence of food outlets and franchises that are selling western cuisine in the country.

“I’ve discussed before how Western culture is destroying Pakistan but Western food is an even more insidious culprit!” he said in a cabinet meeting, sources privy to the development have informed The Dependent.

The premier continued excitedly to reveal the details of his plan. “Burgers, pizza, pasta… none of these are traditional Pakistani foods, and when we eat them, their influence can cause untold side effects including frustration and discontent!”

“My fellow countrymen! You’ll never believe the moral collapse that a delicious slice of pepperoni pizza is going to cost you and your generations!” he cried out, shaking his head, and explained, “That indigestion after three cheesy slices is the biggest telltale of immoral side effects!”

In addition to the moral downfall caused by western cuisine, however, the premier’s focus remained on the direct impact on poverty and hunger, which PM Khan maintains has been erroneously, and continuously, attributed to the government and its policies.

The PM said the coming research conducted on the causal linkage should also discover and provide conclusive evidence for he already knows to be true: that some western foods could even cause or worsen “burgerism”.

“This is a deadly phenomenon that encourages people to adopt liberal beliefs, or to leave Pakistan and settle abroad,” he maintained after which he was reminded by a whispering cabinet minister of the prevalence of many illiberal burgers in the country, who, along with overseas Pakistanis, formed a large chunk of the premiere’s dwindling faithful.

During the cabinet meeting, the PM also announced the launch of a unique culinary guide that would hold recipes of eastern dishes with ingredients that anyone can afford.

“It gives me indescribable happiness to share with you that one masterfully crafted recipe contains only onions, tomatoes, water and red chilli, all of which are so affordable!” Upon hearing this, another cabinet minister whispered in the premiere’s ears.

That didn’t stop PM Khan from officially unveiling the recipe book, which is to be released in all national languages, i.e. Urdu, Turkish and Arabic, and is called ‘Pakwan-e-Mashriq: Pakistan ke Tawana Mazay’.

Sources further confirmed that a bonus edition personally signed by PM Khan would include valuable desi hacks, totkas and aphrodisiacs to cure masculine deficiencies, which seems to be a worryingly increasing and neglected Pakistani problem.

“Some recipes may cause indigestion or excess flatulence in the greedy and unduly liberal and should be taken as a sign of successful detoxing,” said one of the coauthors of ‘Pakwan-e-Mashriq’ while talking to The Dependent.

“However, the government will hold no responsibility for adverse side effects and all recipes must be followed while keeping in consideration the moral and spiritual strength of the consumer.”

Commenting on the development, Federal Minister for Climate Change Zartaj Gul said: “The Prime Minister never fails to surprise in his relentless mission to bring change. He has been proven an expert in knowledge on the sun rising in the East and setting in the West and is now proving himself to be an expert in nutritional psychology.”