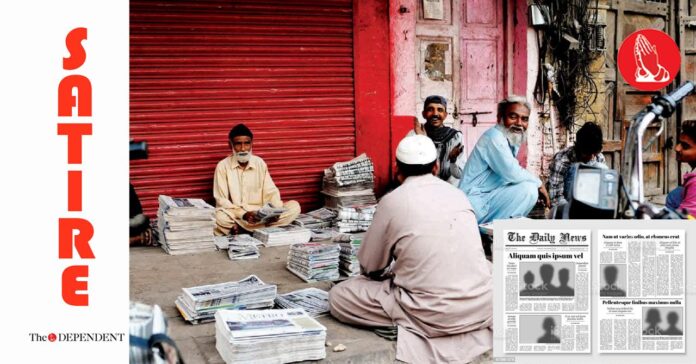 “To meet the requirements of the emerging scenario, the government has planned to set up a new regulatory authority for all types of opinions. The authority will be established with the consensus of all opinion-makers, after they are regulated to make the opinion that such an authority is necessary,” Chaudhry told the media.

The federal minister added that the government believes in freedom of speech and expression and the new authority will ensure that all opinion-makers make opinions independently.

“If you don’t believe me wait for the first opinions made by opinion-makers after POMRA’s launch and you’ll read and hear how they independently made their opinion about how free Pakistan is.”

Backing the information ministry’s move, the criticism mafia of the country also unleashed its wrath on the nation’s opinion-makers that were ‘too opinionated’.

Speaking of the country’s opinion writers, the All-Pakistan Criticism and Armchair Activism Association, said in a statement: “We find their opinion too opinionated. It’s too pointed – almost as if they are purposely targeting us and everything we stand for.”

“We are hurt very badly every time we read or hear a wrong opinion. Who are they to give their opinions? Who asked them for it? Why are there so many of these opinion-makers, anyway? And with so many different opinions, too?”

“You open the newspaper every morning and a good four pages of it is filled with garbage labeled as ‘Opinion’. Whose opinion? What opinion? Why opinion? Where opinion? How opinion?

“I’m sorry but that’s way too much opinion for us to handle. These opinion-makers – they’re way too opinionated.

“And when we dish out our opinions, they’re labeled as unwarranted armchair criticism – eh? Eh?” a retired officer of the Idle-Laters Association concluded.