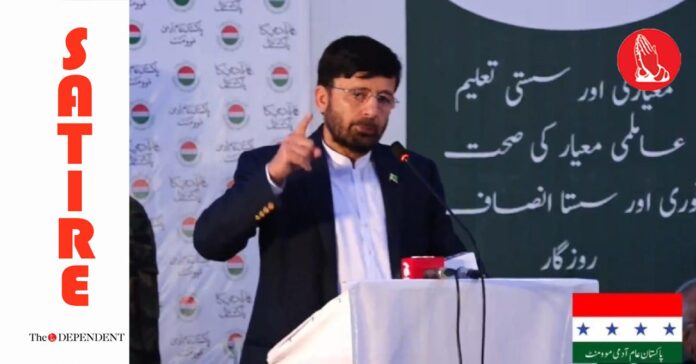 Addressing the launch ceremony of his party at the Karachi Press Club, Khattak said it would emerge as the true representative party of the army and bring ordinary army men to power, unlike other parties that bring generals to power.

“The time has come to give an opportunity to new blood in politics by ending the politics dominated by generals,” the retired general said.

Khattak regretted that the country’s ruling elite had rendered the common soldier “irrelevant” in politics.

“The present judicial system has also failed ordinary lawyers,” he said, adding that his party will also bring judiciary to power by selecting and electing lawyers and judges.

Terming Aam as “a movement to provide a political fruit to the common army man”, Khattak said the party would strive to sweeten the system in the country.

“The genius of Aam can be gauged by its double meaning in Urdu, both of which are applicable in the party’s name and its manifesto. Aam strives to do many double meaning things to this country,” Khattak added.

In this quest, Aam has already announced its first scoop by roping in Aamir Liaquat Hussain, who has already started campaigning for Aam, regurgitating a famous line of his featuring his latest party’s name.

Both Aamir Liaquat Hussain and Maj Gen Saad Khattak will be seen campaigning for Aam on Bol, which will see the latter appear as a guest on Bol House.