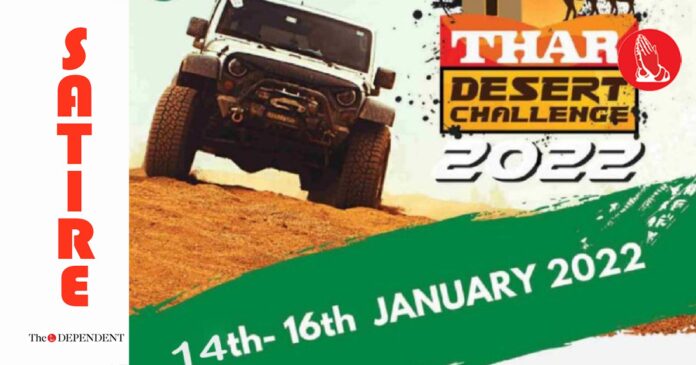 MITHI: The Sports and Youth Affairs Department of the Sindh government organised one of the most thrilling events of the year, the ‘Thar Desert Challenge 2022’.

The event included a horse race, camel race, and the world famous jeep rally, with contestants competing against one another to determine who reaches the finish line first.

The races, spearheaded by the Thar Jeep Rally 2022, pitted participants against the best in the region, as they all vied to become the first to find a food-sufficient family within 120 kilometres of the district capital Mithi.

“The rally promoted the district’s true beauty, which lies in the malnutrition that is unique to the area,” said Special Assistant to the Sindh Chief Minister on Sports, Arbab Lutfullah, while talking to The Dependent during the rally.

“The rally will also promote tourism, since people from around the country, and the entire world, would want to come and see just how many hungry people live within a hundred kilometre radius of where we are standing,” Lutfullah added.

The special assistant further confirmed that in addition to helping the government find people who have sufficient access to food, the rally will also encourage sports in the area.

“The rally will inculcate trends of competition, since we hope to lure an increasing number of locals who would want to participate in a race that might help them find food,” he said.