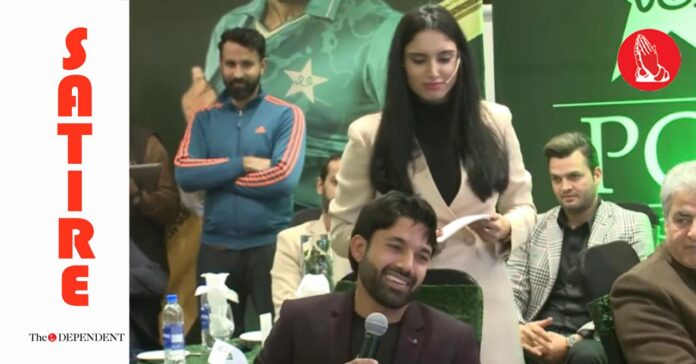 LAHORE: The nation’s female cricket commentators have displayed the perfect manifestation of accommodation, rightfully upheld as the hallmark of good women, by deciding to leave the profession in order to make the national cricket hero Mohammed Rizwan more comfortable, The Dependent can confirm.

Confessing that this was the least they could do for the men who bring pride to the country, the nation’s female cricket analysts and sports journalists have decided to step down so as to never, willfully, come in the visible sight of its high-achieving men.

“Rizwan, undoubtedly one of the best cricketers in the world today, was rightly named the Player of the Year by the PCB. If someone with his performance and stature doesn’t want us to be anywhere around him in professional settings, asking questions as part of our professional responsibility, it is rightly expected of us to move away – and hence we’ve decided to do that for good,” leading cricket commentator Zainab Abbas told The Dependent.

Recalling Rizwan’s recent remarks on why he does not take pictures with female fans who are ‘mothers and sisters’ of others, women sports analysts and journalists further vowed to take note and adjust accordingly.

“We’ll all go back to being mothers and sisters so that if any other women chooses this — or any other — male-dominated profession, the heroes of the profession can single them out for discomfort,” said cricket commentator and former all-rounder for Pakistan women’s cricket team Urooj Mumtaz.

“It’s a shame that we didn’t listen when another national hero, one of the greatest we’ve had, Shahid Afridi, said women should remain in the kitchen,” Urooj added.

The nation, whose comfort level visibly rose following the move, has expressed immense gratitude to all women who have decided to leave their professional fields in order to remain out of sight of everyone except the mehrams.