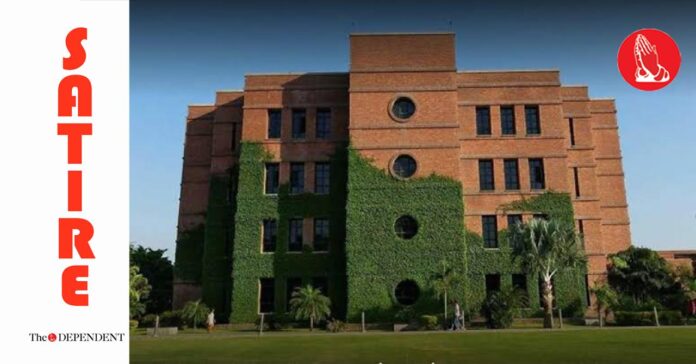 “It was quite something,” said Dr Arshad Ahmed, Vice Chancellor of the university, speaking from a secure location. “He answered all questions that were asked well.”

“No, I was not allowed to go there, but I heard it was pretty nice,” said Dr Arshad, speaking to The Dependent’s correspondent over a plate of daal chaawal at the dining centre.

“I think it’s super-duper cool that we got to interact with the leading management scientist of our times,” said Seher Lashari, politics and economy senior student at the institute.

“I was so excited. Even if he didn’t have his official designation, you can just look at him and know he’s a sciencedaan!”

Her views were echoed by other students.

“He answered all questions, like whether he likes mangoes or what his favourite movie was,” said Rafay Cheema, a sophomore accounting student. “It takes a lot of courage to just come to a hall and answer questions like that.”

“I asked him who his favourite cricketer was and he said he’s begun to admit oldies like Ian Botham and Sarfraz Nawaz.”

“Now, if you’ll excuse me, I have to go and look for my roommate Fayyaz (Mehsud). We can’t seem to find him anywhere,” said Cheema. “Last we saw him was when he asked that long, complicated boring question in the hall. Don’t know what happened, had fallen asleep while he was asking it….”