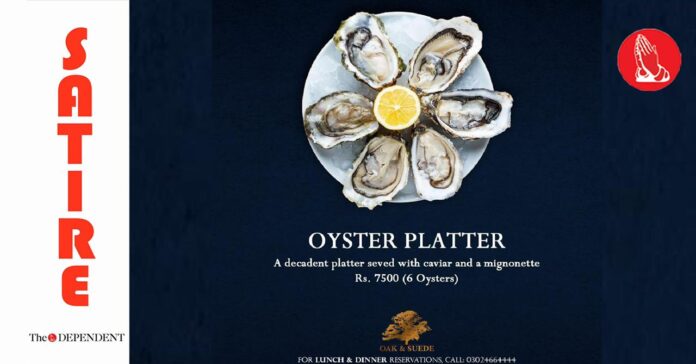 LAHORE: All senior members of the Private School’s Association Punjab (PSAP) on Thursday took to task the PTI government for its disastrous handling of the economy that has led to oyster and caviar prices to skyrocket.

The sharp rebuke comes only a day after the PSAP had taken out half-page ads in major national newspapers appealing to PM Imran Khan and Finance Minister Shaukat Tareen to subsidize delicacies such as oysters and caviar that 99% of the population cannot afford to look at, let alone eat, by fixing the exchange rate at which they are import at Rs80 per USD.

“It has simply become impossible to feed my kid caviar on buttered toast for breakfast now. Thank god I froze that hefty shipment of Foie Gras last month. It should last us through the summers, but what then? I don’t know!”, said one worried mom who owns multiple branches of a private school in Lahore.

In addition to advocating for cheaper oysters and caviar in their joint statement, the PSAP also demanded that they be allowed to increase school fees by at least 20% owing to record inflation in the country.