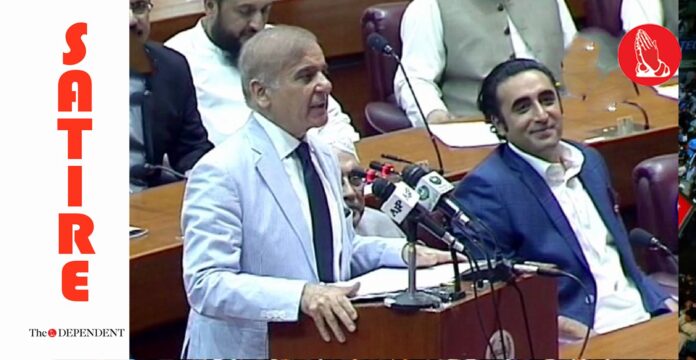 ISLAMABAD: Pakistan Muslim League-Nawaz (PML-N) President and newly elected Prime Minister of Pakistan Shehbaz Sharif has reassured the selectors of their selection, reaffirming that he is unquestionably the right man for the job.

In an inspirational address given moments after being elected as the 23rd prime minister of Pakistan on Monday, Sharif said what the selectors wanted to create with the previous regime is what he already has intrinsically.

“You wanted to create a hybrid regime with someone else, when you had me sitting in front of you, behind you, somewhere around you, at all times,” Sharif said while addressing the selectors.

“You wanted a hybrid. I am as hybrid as it gets!” he further exclaimed, giving the microphones a trademark josh-e-khitaabat punch.

PM Sharif further talked up his hybrid credentials by pointing out how he had created a hybrid out of his own party as well.

“There is a reason why I am the president of the biggest party of Pakistan and the prime minister of the country, while someone else is a London based vlogger,” Sharif said.

“That’s because I can merge impossibilities. I’m the OG of hybrid theories.”