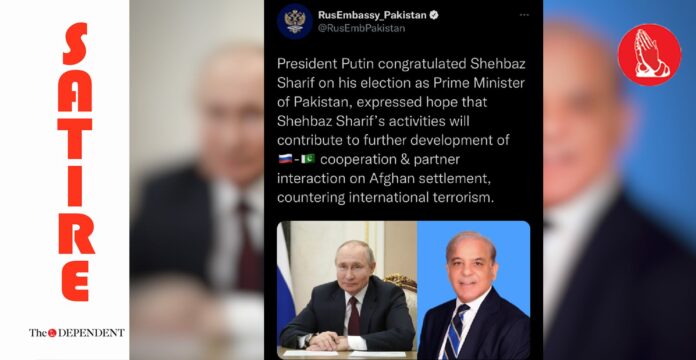 UNDISCLOSED LOCATION: Russian President Vladimir Putin has been installed in Moscow following a western plot spearheaded by the US, The Dependent can sort of confirm.

Putin, who has been serving as either the president or prime minister of Russia since the year 2000 is actually an American stooge, specially planted to cause the downfall of the only worthy sovereign in Pakistan, it has further been faithfully learnt.

These revelations were made in a letter that is yet to be read or written, but has been accurately perceived in an undisclosed location, believed to be within proximity of the eastern bank of the Rawal Lake in the capital.

“Putin was tasked with first enjoying the neutrality of the master of diplomacy and harbinger of sovereignty in Pakistan, so that the great leader is caught off-guard and the American conspiracy to dislodge him can be made successful,” the letter, which hasn’t been scribed, conclusively establishes.

The Dependent made several attempts to verify the letter, including its existence, but was only able to get a glimpse of an envelope, from a distance, which was inconclusive.

The Dependent was informed that it was its criminal lack of patriotism and treasonous tendencies that prevented it from seeing the yet-to-be-read-or-written letter.

- Advertisement -
Facebook
Twitter
Linkedin
WhatsApp
Email
Previous article‘I’m as hybrid as it gets,’ PM reassures selectors
Next articleI’m not supposed to tell you that, says PM on question of who selected last PM