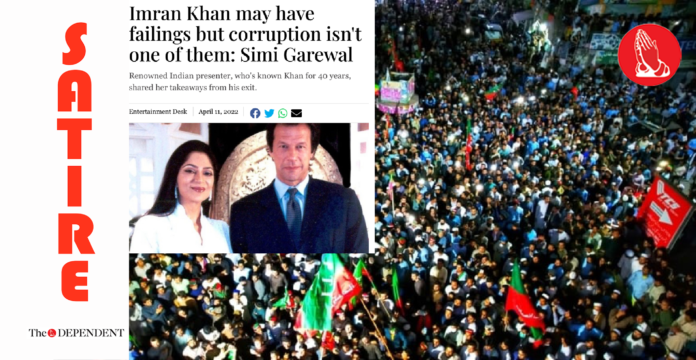 ISLAMABAD/LAHORE/KARACHI/MUMBAI/LUDHIANA – Followers of the Pakistan Tehreek-i-Insaf (PTI) on Monday continued their ‘freedom struggle’ against the ouster of former prime minister and party chairman Imran Khan adding to their list of demands the immediate naming of Indian actor and host Simi Garewal as the next army chief of Pakistan.

Chanting slogans against the military leadership and the man they want ousted, PTI fans across the nation shouted ‘Simi for Army Chief!’ as they demanded resignations and reinstating of the country’s sovereignty.

“Only someone with the heart and mind of Simi Garewal can have the best interests of Pakistan at heart and is worthy of leading such a pivotal institution,” exclaimed a PTI supporter at a gathering near Aabpara in Islamabad.

“Simi knows and admires the only man in Pakistan who can take the country forward. That’s the only thing I require from my army chief,” insisted another PTI fan in Lahore’s Cantonment area.

Sources within the power corridors have revealed that the ‘freedom struggle’ will soon bear fruit. They reveal that the movement initiated on Sunday will bring about further earthshattering change in the country, with Simi Garewal’s appointment as the Pakistan army chief just the starting point.

“Let’s just say when Navjot Sidhu participates in the upcoming Punjab assembly session in Lahore, he won’t just be a member in attendance,” a senior member of the power corridors said while talking to The Dependent.