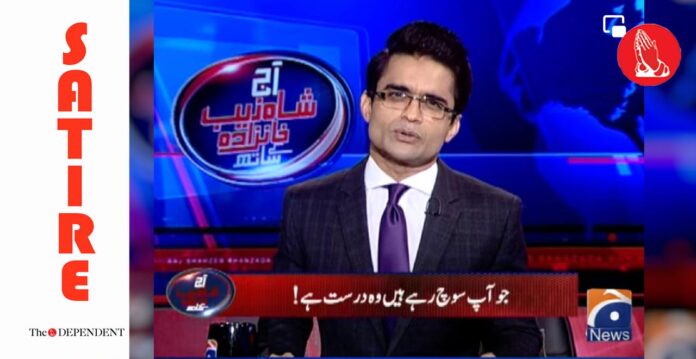 KARACHI: The nation’s top allegorical journalist Shahzeb Khanzada is all set to use his mastery to expose yet another popular entity in the country, The Dependent can confirm.

Sources privy to the production team of ‘Aaj Shahzeb Khanzada Kay Sath’ have revealed that Khanzada is next going to narrate an eight-minute story of a skewed, biased, partisan media house to expose another media house.

“We are working on our notes that narrate how a much-followed media channel in the country became a party’s mouthpiece and aired what can at best be described as propaganda for the party and not what can be remotely called journalism,” one of the show’s researchers told The Dependent.

“The story would also discuss how this partisanship meant that the channel faced backlash and censorship from the government formed by the opponents of the party that it was loudly supporting, even facing blackouts at certain times because of its narrative being aired on TV,” the researcher added.

A producer working on this piece added that the narrative would also show how the channel bizarrely became symbolised as a revolutionary custodian of free press, even though it was mostly safeguarding the freedom of those it was party to.

They also confirmed that while during the narration of the piece everyone would think that the narrator is telling the story of Geo, Khanzada, with his masterful craftsmanship, would unveil the channel to be ARY.

“Or we might reveal that the channel is Geo, if everyone’s thinking about ARY,” the producer said while talking to The Dependent.

“It really depends on which way the narrative appears to tilt, since the stories are so close even hyperbole won’t really give it away,” they added.