‘All of Us are Dead’ festival begins at GCU 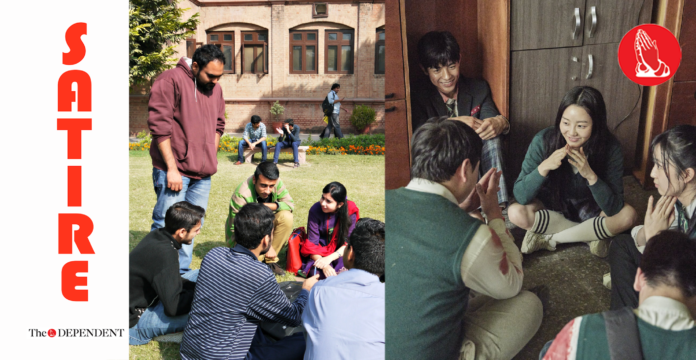 LAHORE – The ‘All of Us are Dead’ festival began at the around one and half century old vintage campus of the Government College University (GCU) Lahore here on Friday.

It has been initiated following the success of the ‘Harry Potter’ festival, with the organisers aiming to replicate the Netflix hit which centers around trapped students looking to escape their educational institute, which has become ground zero for a virus.

Unfortunately, things went wrong, and a Zombie apocalypse has now taken over Lahore, The Dependent can sort of confirm.

“Harry Potter was a week-long festival. This is life-long,” a GCU student possibly told this scribe while looking for an escape route with the aim to protect themselves from the virus.

“The safety of not just the students but also of education is at stake because of this virus,” another student probably told The Dependent.

Meanwhile, Lahore has now been sealed and a military takeover has been announced to prevent any further damage.

Meanwhile, Tehreek-e-Labbaik Pakistan (TLP) has expressed concerns that the zombies can outdo the group’s members in a hand-on-hand battle.

After it was observed that the zombies really follow sound as depicted in the Netflix series, the nation is pleading the nation’s topmost patriotic PR organisation and music label to release a nationalistic anthem.

Sources within the PR organisation reveal that a song entitled ‘Ja Chorr De Mera Lahore’ is already in the works.

At press time it remained unclear whether the scribe reported on actual events or scenes from the ‘All of Us are Dead’ festival at GCU.