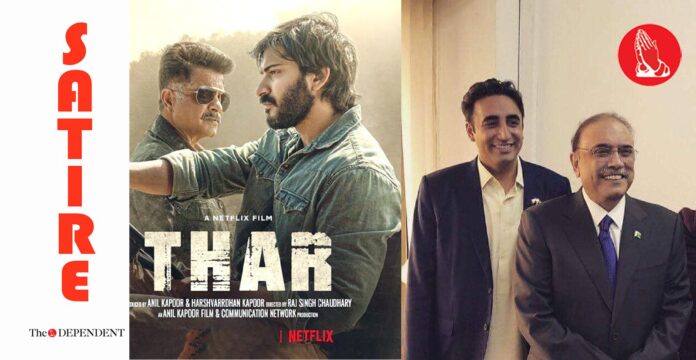 Talking to The Dependent during an exclusive screening for the Netflix production ‘Thar’ released on Friday, Bilawal said that the global streaming giant’s recognition for Tharparkar is evidence of the uplift that the PPP has brought about in the area.

“Netflix is making films on Thar because PPP has developed it so much. I hope everyone streaming ‘Thar’ on their LEDs in Nagarparkar and Chachro enjoys the celebration of their successes,” Bilawal said after the screening.

Further talking about the Anil Kapoor and Harshvarrdhan Kapoor starrer ‘Thar’, Pakistan’s foreign minister said the film paid tribute to the PPP in many ways.

“In addition to making an entire film on Thar, the producers also gave a hat-tip to PPP in how they picked the cast, especially the leads,” he said.

“And of course the western genre that the filmmakers keep talking about – it’s obviously not the US’s west, and is hence west of Rajasthan or western bit of Thar, which is where we are,” Bilawal added.

“I am, in fact, now expecting a sequel called Garhi Khuda Bux, with the same cast and their extended family members.”