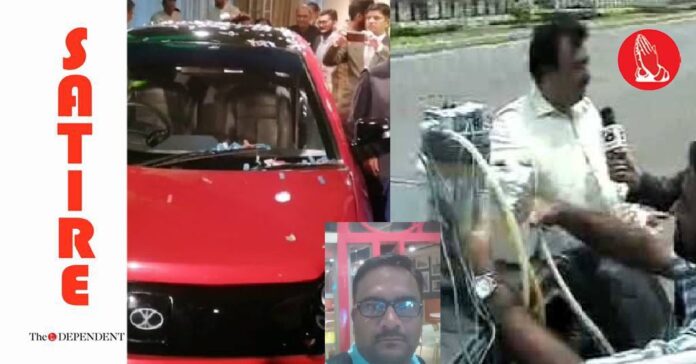 LAHORE: Saleem Ahmed, a Lahore-based businessman came down harshly on the recently unveiled made-in-Pakistan electric car Nur-E 75, put together by the Dice Foundation.

“It seems shoddy, design-wise,” said Ahmed, who back in 2012 had, as a father of three, tweeted “this is huuuuge” about the water-kit-powered car introduced by “engineer” Agha Waqar.

“I don’t think the charge is going to last that long,” said Ahmed of the Nur-E 75’s electrical charging system that had been designed by graduate students of the Sir Syed University of Engineering and Technology. He also said (back in 2012) on Twitter: “this is it! It’s not just cars, but also all our electricity problems! We can run Agha Waqar’s cars as generators at home!”

“The design is also a little shoddy,” he said of the Nur-E 75, which has been designed by graduate students over at the National College of Arts, Lahore. “The interior design and even the exterior, just doesn’t sit well. Trust me, I have a natural sense about these things.”

Ahmed had also thought in 2012 that renowned physicist Professor Pervez Hoodhbhoy’s frustration during a live television debate with Agha Waqar was only the result of jealousy because the latter had designed something that Hoodhbhoy never could.

“I have a natural sense about these things.”