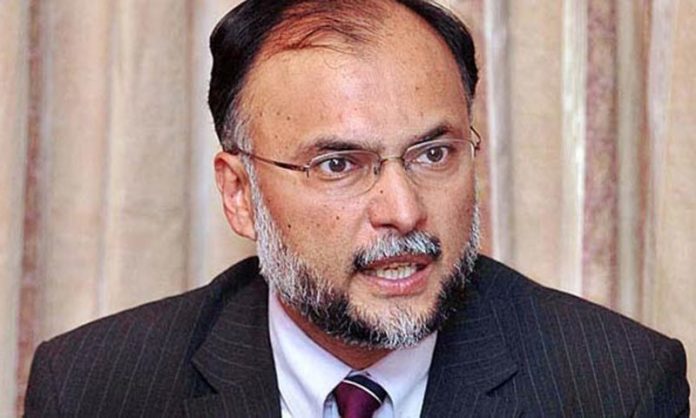 Islamabad: Minister for Planning, Development and Reforms, Ahsan Iqbal Thursday said the relocation of Chinese industry in Pakistan would help create a huge number of jobs for
local people.

“After fixing of infrastructure under China Pakistan Economic Corridor (CPEC), Chinese industrialists plan to take advantage of low cost labour in Pakistan by relocating their industries in Special Economic Zones being constructed under CPEC, as they are unable to compete with Pakistan in terms of labour cost”, Ahsan said while addressing China Pakistan Economic Corridor (CPEC) Logistic International Forum organized by National Logistic Cell (NLC) here.

He said it was impossible for the Chinese industrialists to bring the labour along with their industries as it would increase cost of their business. The minister said nine SEZs would be established in all provinces under CPEC and the ownership of the SEZs had been given to the provinces, and all provinces were fully cooperating in efforts to establish the SEZs. He added with the establishment of road and railway network in the country under CPEC, logistic and transport sector would be promoted.

“Work on Peshawar-Karachi Motorway is in progress on full pace and hopefully it would be completed by end of next year”, he said adding after completion of ML-1 railway track from Peshawar to Karachi, the speed of railways would be increased from 80 to 180 km per hour.”

Ahsan Iqbal stated the current government had invested heavily in energy sector which would result in addition of 10,000 MW electricity to the national grid by May, 2018. Additionally, he said the government was also upgrading the transmission lines in order to carry extra load of electricity from source to the consumers.

He said under master plan of CPEC, Gwadar city would be developed as an international port city at par with Singapore and Hong Kong port city within 20 to 30 years. Iqbal stated the idea of Gwadar Port city was initiated by the PML-N government in 1990s while due to political instability, the idea remained stuck and could not be materialized until 2013, when the current government handed over the work of port city to China under CPEC.

Addressing the forum, former finance minister, Dr Salman Shah proposed to establish an autonomous body “National Integrity Logistic and Transport Authority” (NILTA) to help promoting the sector at world class level so that it could face the challenges
emerging from CPEC.

He proposed that special measures should be taken to get real benefits of CPEC as the mega project had the potential to take the country’s GDP to over one trillion dollar by 2025. By that time, he said the country’s economy should also grow by 8-10 per cent per year while he also urged the government to set an ambitious target of producing 25 million new jobs in the country under CPEC in next 10 years.

In his concluding remarks, Director General, NLC, Major General Mushtaq Ahmed Faisal announced to establish CPEC Logistic Center to bridge the gap between private sector and the government, and to provide feedback to the policy makers.