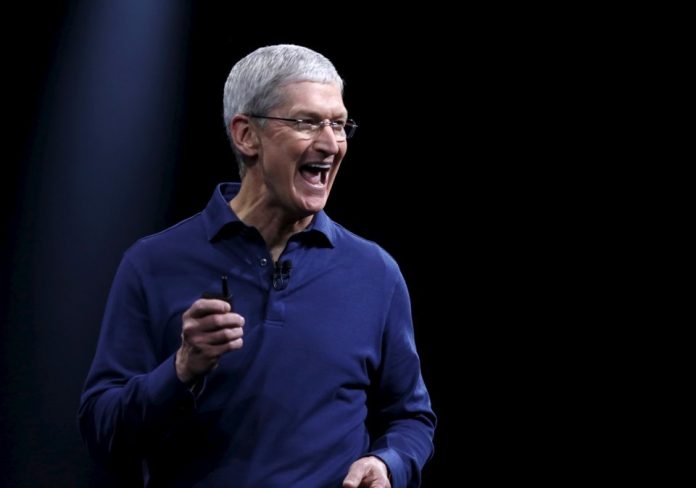 Cook made the comments on Sunday at the opening ceremony for the conference — an event designed to globally promote the country’s vision of a more censored and controlled internet. It’s the second Chinese appearance in two months for the executive, who met with President Xi Jinping in October.

“The theme of this conference — developing a digital economy for openness and shared benefits — is a vision we at Apple share,” Cook said. “We are proud to have worked alongside many of our partners in China to help build a community that will join a common future in cyberspace.”

Cook and Google Chief Executive Sundar Pichai are both making their first trips to the event. The attendance of leaders from two of the world’s most valuable tech giants lends credibility to China’s efforts to influence the global internet so it better resembles its own.

Cook’s comments come at a pivotal point for the company’s future in China, which is now its biggest market outside of North America. It relies on the sale of hardware and services in the world’s most populated country to propel revenue and profit growth. But the efforts required to stay in China’s good graces are causing tensions with civil libertarians and politicians at home.

He said Apple’s operations in the country began three decades ago with a handful of employees. Today, it helps support more than 5 million jobs in China, including 1.8 million local mobile app developers, he added.

Apple has come under fire for cooperating with Chinese authorities in removing apps that give users uncensored communications. In November, Apple complied with government orders to pull Microsoft Corp.’s Skype phone and video service from the Chinese version of its popular app store. Cook used an earnings call with investors to justify such moves, saying it obeyed the laws of the markets where it operates.

“Much has been said of the potential downsides of AI, but I don’t worry about machines thinking like humans. I worry about people thinking like machines,” he said. “We all have to work to infuse technology with humanity, with our values.”

The technology of the future should have openness, creativity and safeguards to protect users while providing privacy and decency, he added.

It’s a goal that, according to Cook’s Chinese hosts, can only be accomplished through more laws and regulations that control what can be shared online. Politburo member Wang Huning called for a global emergency response team that would respond in times of crisis using new and undetermined measures.

“What we propose is we should promote a controllable security and build a new order,” Wang said through a translator. “Cybersecurity is a serious challenge. Cyber crimes and cyber terrorism have grown more rampant. The world’s destiny has become more intertwined in cyberspace.”

Unlike Cook, Google’s Pichai did not deliver a keynote speech and was instead on a panel to discuss the digital economy. Confusion among some of the conference staff on the ground meant many didn’t know when the session would begin — much of the vast hall remained empty partway through the session.

Wuzhen holds special significance for the search giant, whose AI programme defeated the world’s top-ranked player of the ancient board-game GO at the same venue earlier this year — a point Pichai alluded to as he promoted the company’s kit of AI software tools called TensorFlow.

“There are many small and medium businesses in China who take advantage of Google to get their products to many other countries outside of China,” he said. “Technology is giving opportunities at a global scale, driving interconnectedness and cooperation and I think it’s a big trend and I think it’s almost irreversible at this point.”