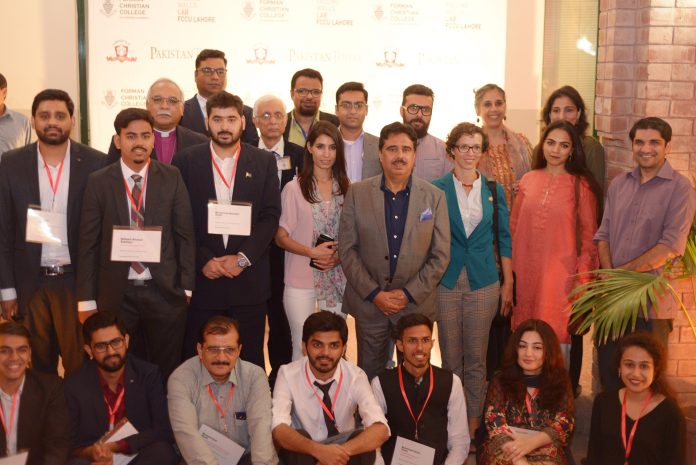 — Winners will travel to Berlin to take part in the finale, scheduled to held on November 8-9

Forman Christian College University (FCCU) on Wednesday hosted the Falling Walls Lab, attracting young scientists and entrepreneurs from different fields. This was the third year in a row that FCCU received the honour of hosting the event.

The event was moderated by FCCU Assistant Professor for Economics and Business Mariam Khalid. A large number of FCCU faculty members and students also attended the event.

Each applicant was allowed three minutes to present their powerpoint slides, followed by a two-minute question and answer session.

The jury awarded the first prize to Ibrahim Shah, who wowed the audience with his idea of using materials like titanium and carbon fiber to create specially-designed prosthetics aimed at tackling disability. Ibrahim will now fly to Berlin, Germany, to participate in the Lab Finale on November 9.

The second prize on the occasion was won by Mamoon Sharif who pitched his idea aimed at breaking the walls of poor education. For the third prize, Misha Farhana was declared a joint winner for her idea on breaking the wall of chronic pain along with Muhammad Hamza for his idea pertaining to tackling water pollution.

The event culminated with a networking tea organised for the participants, jury members and other guests.

It is pertinent to mention that the university had received 53 applications out of which 12 individuals were shortlisted and were invited to present their innovative ideas at the event.

Each year, academic institutions are invited to host their own FWLs in order to showcase quality, diversity, and passion of the region’s most innovative minds. Winners of these labs will travel to Berlin, Germany, to take part in the Lab Finale, scheduled to held on November 8-9. The date for the finale coincides with the anniversary of the fall of the Berlin Wall on November 9, 1989.

In Berlin, as many as 100 finalists would present their ideas and research or business model in front of a distinguished jury, besides showcasing their solutions for today’s pressing challenges. The three winners of the finale in Berlin would be awarded the “Falling Walls Young Innovator of the Year” title, prize money, as well as an opportunity to pitch their ideas once again on the grand stage of the Falling Walls Conference.

Muhammad Faran Bukhari
The writer is an economics and business journalist reporting for Profit. He is currently an MBA candidate at LUMS University and holds a Bachelors degree in Economics and Politics from the same university. He can be reached at [email protected] or at twitter.com/muhammadfaran