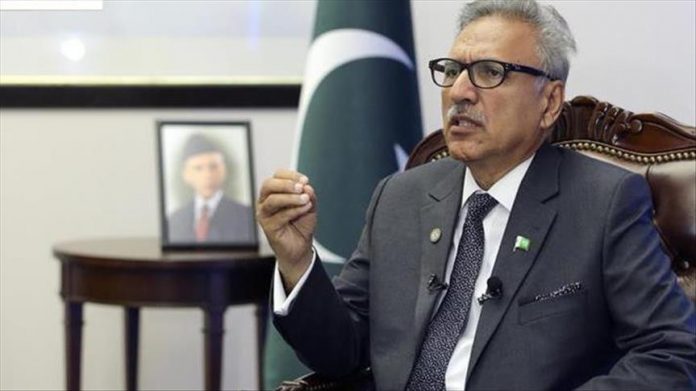 “Political maturity called for consensus in the interest of nation-building, which will eventually lead Pakistan to become an economically robust and strong country,” the president said while addressing an award distribution ceremony, arranged for the business community by the Faisalabad Chamber of Commerce and Industry (FCCI).

He termed Pakistan as one of the most generous countries in the world as it accommodated more than 3.5 million Afghan refugees, adding that around two million were still residing in the country.

He compared this gesture to other “highly developed countries” which were not willing to welcome refugees.

President Alvi said Pakistan, despite limited resources, did play an unprecedented role in the facilitation of the refugees. “We are proud of this, as it ensures a very prestigious position for the country in the comity of nations,” he added.

regarding recent tension between Pakistan and India, he said Indian leaders, civil society and their media were creating war hysteria, whereas Pakistanis unanimously proved that they were peace-loving people.

He said Pakistan has successfully overcome the menace of extremism and terrorism. “We are lucky that we have overcome the challenge with great sacrifices and fortitude,” he remarked.

He said that Pakistan had steered out of difficult times and the economy was poised to have growth momentum within months, and not in years.

He said the government was committed to providing ‘ease of doing business’, besides improving its ranking on international index.

Highlighting vital role of IT sector, President Alvi said that it could transform the economy by engaging neglected segments, especially women.

About progress in agriculture sector, he said that it had huge potential for growth but there was a need to re-align top priorities in order to fulfill the requirements of agrarian community.

President Arif Alvi said the government had chalked out a programme under which agriculture graduates will work at farms to get practical knowledge of agri practices.

He said that tourism was yet another sector which could boost the economy. “Back in 2015, only 1,500 tourists visited Gilgit and Baltistan. In comparison, some 2.4 million tourists had visited the GB since the improvement in security,” he noted.

The president said that the government was committed to ensuring education across the country, especially for those 20 million children who were still out of schools.

Earlier, in his welcome address, FCCI President Syed Zia Alumdar Hussain briefed the president about the Faisalabad city and FCCI, saying that the apex body was serving the business community of Faisalabad for the last 44 years.

He paid rich tributes to the visionary leadership of Prime Minister Imran Khan and appreciated his hard work in achieving the national dream of “economic sovereignty”.

He lauded the economic policies of the government and said that despite the critical economic situation it inherited from the previous government, the tariffs for gas and electricity tariff were reduced for five main export-oriented sectors.

He also highlighted various problems confronted by the business community of Faisalabad and called for the establishment of an IT University, a Lahore High Court bench as well as the provision of facilities at the Faisalabad International Airport.

Earlier, the president gave Business Excellence Awards to industrialists and traders for their outstanding performance in different sectors and for their contributions to the economy.