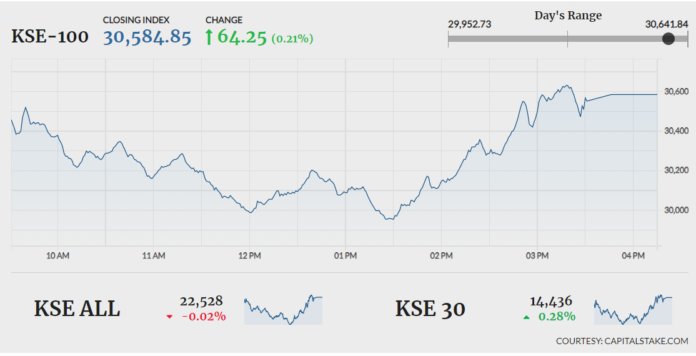 KARACHI: After bleeding for most part of the day, the Pakistan Stock Exchange (PSX) managed to stand its ground and ended the session on Tuesday in the green zone.

According to market analysts, weak macroeconomic situation and ongoing tensions between India and Pakistan have been denting investor confidence at the PSX.

On the economic front, the Privatisation Commission (PC) board gave a go-ahead for the hiring of financial advisers in the privatisation of two blue-chip oil and gas exploration firms, three power generation companies, two financial institutions and two engineering companies.

On the other hand, the power generation and distribution sector (+67.15 points), fertilizer sector (+62.29 points) and cement sector (+58.28 points) rescued the index from closing in the negative zone.

Unilever Pakistan Foods Limited (UPFL 0.00pc) announced its performance for the second quarter of FY19. An interim cash dividend of Rs63 was announced in addition to Rs88 already paid. The company’s sales grew by 7pc YoY, while its earnings per share improved from Rs45.40 in the same period last year to Rs62.13.