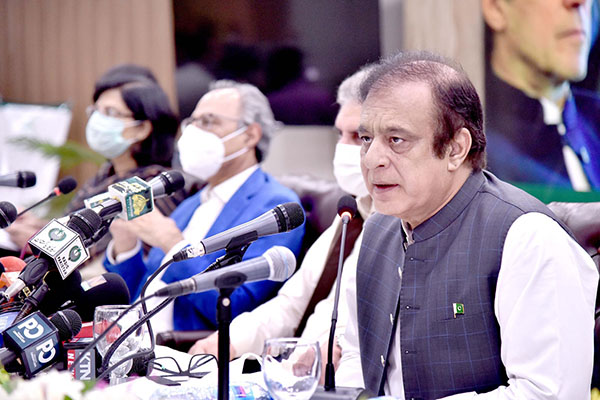 ISLAMABAD: As the Pakistan Tehreek-e-Insaf (PTI) government entered into its third year, Adviser to the Prime Minister on Finance Abdul Hafeez Sheikh on Tuesday said neutral international observers have acknowledged economic progress made by Pakistan during the two years of the federal government despite the coronavirus crisis.

Sheikh was Speaking at a press conference alongside federal ministers and special assistants to highlight progress made during the past two years of the incumbent government.

Talking about the Ehsaas cash assistance initiative, under which the government handed out Rs12,000 a month cash to lower-income families hit by the pandemic, Sheikh said that it was the first time that a government had introduced a relief programme to support the masses. He said that millions of people had benefitted from the programme.

The government also introduced cheap loans to assist small traders so that they would not have to fire their staff due to lack of funds. The government also provided relief to traders by paying their bills for three months, he said.

Due to the government’s policies, economic observers and organisations like Moody’s, Fitch and Bloomberg had improved Pakistan’s rating, he added.

Foreign Minister Shah Mahmood Qureshi, who spoke before Sheikh, shed light on the initiatives taken up by the government on an international stage. He said that Prime Minister Imran Khan has “internationalised” the Kashmir issue and now, the world is talking about the violation of rights of the residents of Indian occupied Kashmir.

He said that two years ago, the US had declared Pakistan as “part of the problem”. However, due to Pakistan’s role in the Afghan peace process, “today, we are part of the solution,” the foreign minister said.

Discussing the “unprecedented” challenges posed by the novel coronavirus to Pakistan’s economy and the health sector, Planning Minister Asad Umar explained how the government dealt with them.

“Covid is the biggest challenge not only for Pakistan but the entire world in the last century,” he said. “A lot of pressure built on the health sectors and the economy. It was a unique challenge after the Spanish flu. The disruption caused by it in health and economic sectors is unprecedented.”

Umar said that the world’s leading economies were reeling from the impact of the novel coronavirus. But the world had acknowledged Pakistan’s success against the pandemic, he added.

“Not only people in Pakistan but elsewhere in the world too now say that Pakistan is among those countries who can be said to have tackled the pandemic successfully,” the planning minister said.

He said that philanthropist Bill Gates while comparing the coronavirus situation in India and Pakistan, had said that the latter had dealt with the pandemic in a comparatively better manner.

Earlier this month, the UN General Assembly president-elect Volkan Bozkir also said in his meeting with the foreign minister that the world can learn from Pakistan, Umar said and added that The Wall Street Journal, which doesn’t report “too positively” on Pakistan acknowledged that the country was a bright spot in the world when it comes to coronavirus.

The reason behind Pakistan’s “successful” response to the novel coronavirus, through which the government not only curbed the spread of the disease but also saved the country’s economy from collapsing, was because the prime minister prioritised the welfare of the people, the planning minister insisted.

“All the steps taken by Imran Khan reflect [his focus on the weakest sections]. So when all the political leaders were saying we should lock down the country […] they did not think how it would impact the poor.

“I think the main reason was that Imran Khan thought about these (lower income) people from the start. We took quick and timely decisions and generated employment for people. We started an unprecedented programme to help people. Sania Nishtar did a commendable job.

“As finance adviser, Dr Hafeez Shaikh did not once say anything about how the funds [being allocated] to help people could impact the budget. He was also successful in controlling fiscal deficit.”

Umar also addressed the criticism levelled by the opposition on the government.

“[Our critics] have started using the word ‘incompetent’. Shah Mahmood Qureshi [is qualified] from Cambridge, Hammad Azhar from Lincoln’s Inn, Dr Hafeez Shaikh from Harvard so this team. I don’t know where Sania Nishtar received her education from but I do know that her qualifications exceed mine,” he said.

Critics also claim that the prime minister is unable to work with others and is a “solo player”, Umar said, adding that the criticism was unfounded. He said that an example of PM Imran’s willingness to work with everyone can be seen in the way the premier brought together all political players on one forum to deal with the Covid-19 pandemic.

“Yes, he is not ready to grant NRO [just] to make people come on the same page as him. [But] the way Imran Khan worked together with all the institutions in the pandemic crisis is unprecedented.”

Minister for Industries Hammad Azhar — who had assumed charge in April this year — also highlighted the steps taken by his ministry over the past few months to help businesses cope with the impact of the pandemic.

He said that Pakistan adopted a “different route” to deal with the health crisis and ensured that supply chains were not affected despite lockdown in the country. The reason there was no shortage of goods in the country was the decision to reopen essential industries, Azhar explained.

SAPM on Poverty Alleviation Sania Nishtar spoke about the government’s Ehsaas programme, which she said was receiving praise internationally.

She said that under the Ehsaas Kifalat programme, monthly financial aid and bank account facilities were provided to lower-income people. Interest-free loans were provided to people — 45pc of whom were women — who wished to start their own businesses.

Apart from that, scholarships were also provided under the Ehsaas programme, she said. Nishtar also spoke about Ehsaas Nashunuma Programme under which measures were being taken to prevent stunting due to lack of nutrition among children.

Soup kitchens for labourers and shelters for homeless people were also established across the country, Nishtar said.