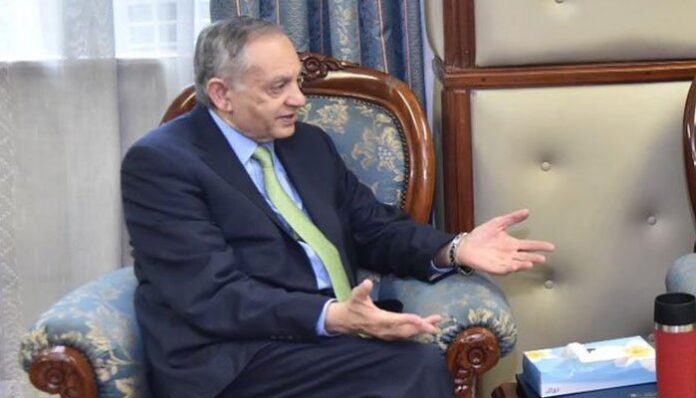 ISLAMABAD: Adviser to the Prime Minister on Commerce and Investment Abdul Razak Dawood has said that the government’s vision for trade and economic relations with Afghanistan and Central Asian Republics(CARs) is to make Pakistan a hub for trade, transit and transhipment.

In a series of tweets on Saturday, the advisor said, “Our trade must be based on secure, open, consistent, reliable and legal movement of goods at the Afghan border along with enhanced connectivity with Afghanistan and Central Asian Republics.”

“This is a long-term vision and, through our current engagement with Afghanistan and Uzbekistan, we are laying down the foundation for its implementation which will ensure that Pakistan leverages its geo-economic location in the region to enhance international trade,” he said while adding, “our discussions with Afghanistan over the past few days are a step in that direction”.

The advisor said that Gwadar port would provide huge opportunities to the energy-rich Central Asian countries and Afghanistan for regional trade connectivity.

He said that the government is prioritising economic integration to promote regional trade and connect the regional important trade players with the deep sea port, Gwadar.

Earlier, the advisor said that Central Asian Republics are demanding the provision of trade facilitation and warehouses in Gwadar and Bin Qasim sea port for international and regional trade while the Afghan government has requested Pakistan to provide a cross-stuffing facility at Gwadar Port.

He said that the deep seaport of Gwadar has its own geo-strategic and economic importance which is located at the centre of regional connectivity and a possible railway link from Gwadar to Kandhar and other parts of Afghanistan.

He said that Central Asia via Afghanistan can become a key trade and transportation route for the entire region.

Dawood said that Pakistan is actively participating in regional forums of Central Asia Economic Cooperation (CAREC) and Quadrilateral Traffic in Transit Agreement (QTTA) so that maximum benefits could be taken when the Gwadar Port operates at full capacity in near future.

He informed when modalities are finalised by the Federal Board of Revenue (FBR), ample employment opportunities will be generated for the locals.

He said the development of Gwadar Port will not only provide the shortest possible route to the goods in transit but also provide more opportunities to establish new industries as huge investments have been pouring in under China-Pakistan Economic Corridor (CPEC).

“The whole dynamics of regional connectivity would change with the improvement in trans-shipment facilities at Gwadar,” he concluded.