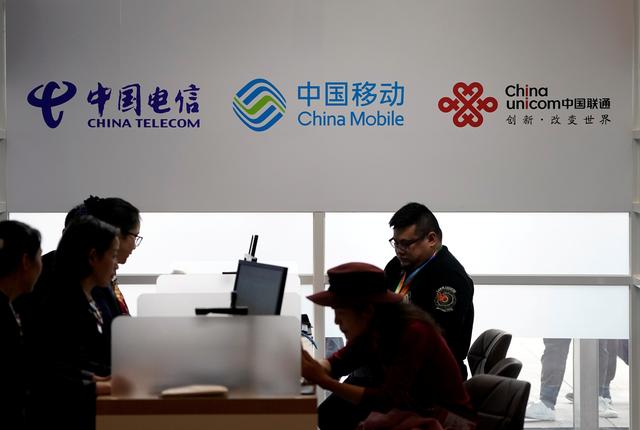 HONG KONG/SINGAPORE: The New York Stock Exchange said it no longer intends to delist three Chinese telecom giants – a shock reversal of an announcement made only last week and deepening confusion over a US crackdown on firms said to be linked to China’s military.

The bourse, which had planned to delist the companies before Jan 11, said in a brief statement it had made the decision “in light of further consultation with relevant regulatory authorities.”

Coming in the final weeks of Donald Trump’s presidency, the flip-flop has underscored the lack of clarity about the implementation and implications of the US ban on investment in 35 Chinese companies deemed to have military links.

“(It) shows how little light there is in that set of regulatory guidance so far, especially around the time the US is changing administrations,” said Tariq Dennison, managing director at GFM Asset Management in Hong Kong.

Dennison’s funds hold China Mobile shares in both Hong Kong and New York. He has almost entirely unwound New York positions in anticipation of needing to find U.S. clients investments with less exposure to risks associated with the investment bans.

Some analysts said they believe the exchange had been told by the Office of Foreign Assets Control, which is responsible for enforcing sanctions, that delistings were unnecessary even though investment in related companies was banned.

“We think this is the logical conclusion,” said Jefferies analyst Edison Lee, who called the about-face “bizarre”.

Others added that the reversal made sense for the bourse.

The November order from Trump’s administration has prompted index makers including FTSE Russell and MSCI Inc to cut a dozen Chinese companies on the list from their benchmarks, but none removed the three telecom firms, all of which have major passive U.S. funds amongst their top shareholders.

The three telecom firms said in statements that they had taken note of the NYSE’s latest announcement and would release information in accordance with regulations, adding that investors should pay attention to investment risks.

China’s foreign ministry has lambasted what it calls the U.S. stretching of the concept of national security to suppress Chinese companies.

It reiterated on Tuesday that the status of the United States as an international financial centre relies on the confidence that global companies and investors have in the certainty of its rules.

A representative for the NYSE, which is owned by global exchange operator Intercontinental Exchange Inc declined to comment beyond the bourse’s statement.

The NYSE move briefly lifted the yuan to a new 30-month high on hopes it might herald some kind of easing in geopolitical tension, but some were not optimistic that President-elect Joe Biden will bring about a quick de-escalation.

“He is inheriting a position of tension in US-China relations where he will probably not want his first 100 days to be remembered for instant concessions,” said GFM Asset’s Dennison.