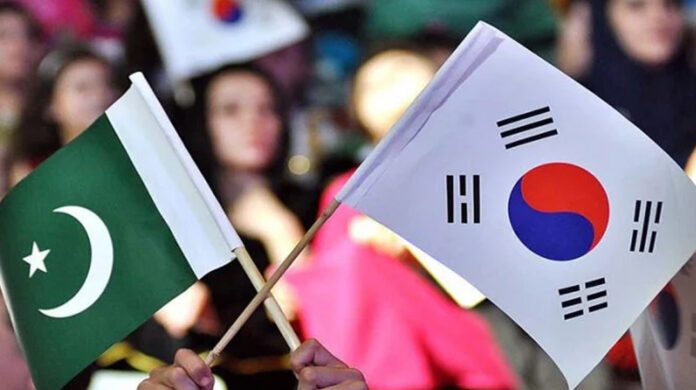 ISLAMABAD: Officials of Pakistan’s Ministry of Commerce (MoC) and South Korea’s Ministry of Trade, Industry and Energy (MOTIE) held the 3rd Round of Joint Trade Committee (JTC) on Wednesday.

The delegates emphasised the need to enhance the volume of bilateral trade and investment linkages between the two countries. The Korean head of delegation raised corporate issues faced by the companies in Pakistan and requested immediate action in this regard. The Pakistani delegation assured complete facilitation to the Korean companies in resolution of outstanding issues.

Both sides also held productive discussions on the prospects of a Free Trade Agreement between the two countries.

The Korean delegation was informed about the attractive investment opportunities in Pakistan, including the success of Korean automobile companies in Pakistan. Similarly, the new cellular and electric vehicle (EV) policies were also highlighted as a lucrative investment opportunities. Furthermore, emphasis was laid on cooperation in the field of textile research and building capacity of human resource through KOICA programmes.

The delegates agreed to continue bilateral cooperation and work towards extending the validity of the existing Memorandum of Understanding (MOU) on Trade and Investment Cooperation between MoC and MOTIE with requisite modifications to cater to the new trade and investment environment.

It was also agreed to expand cooperation between TDAP and KOTRA through working towards an MOU between two authorities for trade facilitation and trade promotion.

Both sides called for considering holding a meeting at ministerial level to bolster trade and investment cooperation between two countries.

It was agreed that the next JTC meeting would be held in 2022.