Man of the hour: Fawad Alam follows century by waiting in line for omelette 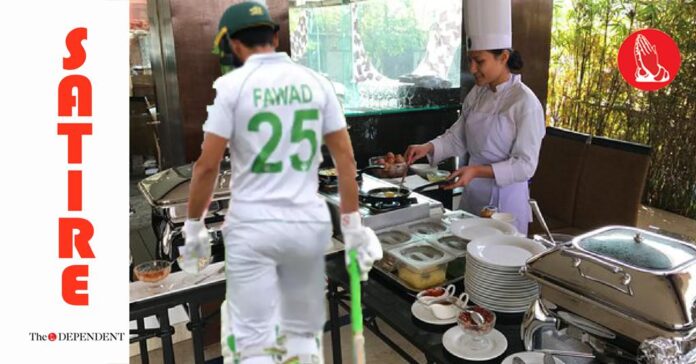 It was a tour de force for Pakistani batsman Fawad Alam on Wednesday when he scored 109 runs on the second day of the test match series against visiting South Africa, which he followed by waiting in line for an (egg) omelette without requesting any assistance whatsoever.

“To see the stellar performance of this scandalously ignored batsman on his day while his teammates were faltering was one thing,” said noted sports journalist Saleh Zaafir. “But for him to follow it up with his man-of-the-people simplicity at the Karachi Gymkhana was quite something else.”

“He didn’t even say anything to the chef when he told him they were out of mushrooms. Or cheese. Or eggs, which were all taken up by former chief selector Inzamam-ul-Haq who had insisted on a 16-egg omelette after calculating how far Fawad was in the queue,” Zaafir said.

ISLAMABAD – Prime Minister Imran Khan on Thursday lashed out at the opposition Pakistan Democratic Movement (PDM) for “making a mockery of democracy” in...
Read more
Sports

March 1, 2021
Each of the four provincial meteorological departments have predicted that there will be heavy fog in the four respective provincial assemblies on Wednesday, which...