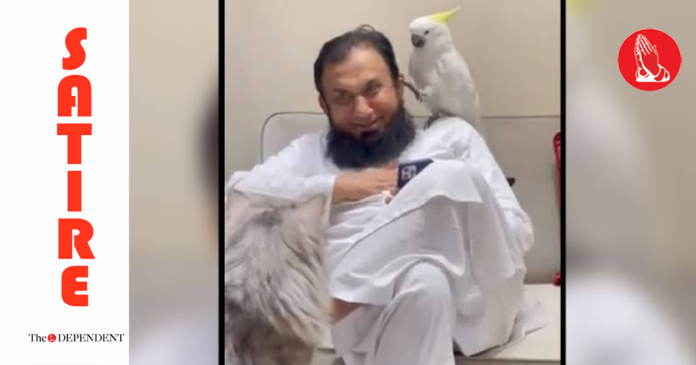 RAIWIND — Parrot clerics all over the country have condemned a recent incident where a prominent parrot was seen kissing a human in a video.

The influential Tota Tableeghi Jamaat organised a demonstration on Wednesday condemning the parrot, but also asking the human to have some sense of ethics and morality.

“We were showed this brief motion picture on what we are told humans call ‘Instagram’, where a member of the parrotTableeghi Jamaat was seen kissing a peculiar species,” a prominent Tableeghi tota said while talking to The Dependent.

“This foreign species was not only odd, but also na-mehram. It is important that all species understand that they can only interact with mehram species, to avoid committing great sins,” the tota, with millions of followers, added.

In addition to the Tableeghi Jamaat, other missionary and evangelical parrots have also asked other parrots to refrain from public indecency, no matter how tempted they are.

“Only those that will resist the urge to sin in this world, will be rewarded with voluptuous totis in the hereafter,” another senior cleric told The Dependent.

The cleric then went on to unveil the statistical analysis of the totis, including their physical dimensions, which unfortunately cannot be printed in this space, even if thoroughly enjoyed by this scribe.

- Advertisement -
Facebook
Twitter
Linkedin
WhatsApp
Email
Previous article‘Save me from an arranged deal’: UK man advertises himself on billboards to find a deal
Next articleNation to live happily ever after by 2026