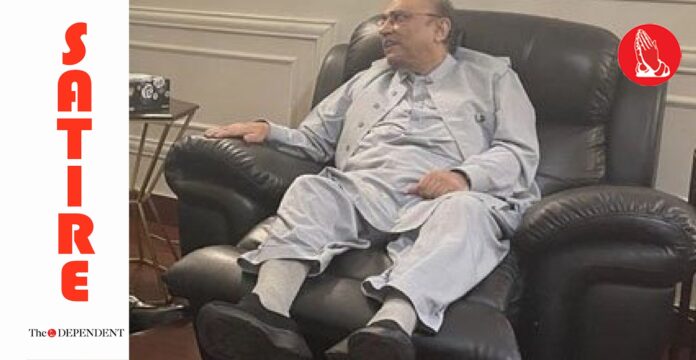 In what the legal experts believe is the definitive verdict on 63A, the Supreme Court bench reiterated that the article protects the system of Asif Ali Zardari and ensures that all members of all assemblies abide by him.

During the hearing the reclined CJ Bandial said, “As Zardari promotes democracy, democracy too should promote Zardari.”

Further clarifying the ruling, the chief justice said that it “goes without saying” that the article ensures that not only those parliamentarians that are in Zardari’s party, or members of allied parties, but anyone who wants to be considered the member of the house would need to vote in accordance with Zardari’s wishes.

“Otherwise, you’re in the wrong room. Just get the hell out of there,” noted CJ Bandial atop his barcalounger.

While legal experts maintain that the ruling is comprehensive, and has clarified how Article 63A should be interpreted, not everyone is on board with the decision.

“What the SC has done is that it has in effect kept the background of our floor-crossing and horse-trading in mind. Now all floors and horses belong to Zardari,” Supreme Court lawyer Faisal Chaudhry said.

“Someone would have to be mad now to [now] vote against Zardari’s direction. Not only would the vote not be counted, they could also lose their seat and possibly face jail time,” exclaimed Constitutional expert and Supreme Court lawyer Salman Akram Raja.