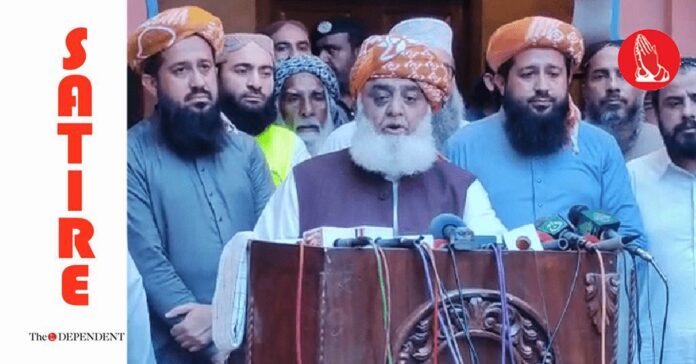 With the matter of the new chief’s selection causing a stir in political circles, especially between the Pakistan Tehrik-e-Insaf (PTI) and the PDM led government, the PDM chief and founding leader of the Jamiat Ulema-e-Islam Fazl (JUI-F) said the federal government has reached consensus on the best way to address the issue.

“The one who is responsible [for appointing the chief] will fulfil this task on the basis of merit by using @friends tag on Facebook and then see which profiles get the notifications. Who is he (Imran Khan) to tell the government how to tag and whom to tag,” the JUI-F chief said during a press conference in Larkana.

Fazl said those not getting the notifications of government members’ @friends tag could not be allowed to “interfere in any way” in the next chief’s appointment. “You can cry and scream all you want. Go tag your own friends in your sob stories,” he said.

Fazl also told the media that the 70-member, and growing, federal government cabinet is also being shaped up using the @friends tag on Facebook.

“And needless to say no policy is going to be made by a Facebook profile whose @friends tag does not notify me on Facebook,” the PDM chief maintained.

When approached for a comment PTI chief Imran Khan said that he too is going to unveil a plan to use @friends tag to ensure ‘haqeeqi azaadi’ for the nation.

“Punjab government is soon going to pass a law that anyone whose @friends tag on Facebook sends a notification to Nawaz Sharif should be tried for treason,” Khan told The Dependent.

Elsewhere, security sources have confirmed that the @friends tag on senior officers’ profiles continues to send notifications to the Taliban leadership in Swat.

- Advertisement -
Facebook
Twitter
Linkedin
WhatsApp
Email
Previous articleRidiculous to book me for religious hatred I was spreading on behalf of party leadership: Marriyum Aurangzeb
Next article‘If I can teach Islamiyat at UET, Imran Khan can teach fascism at GCU,’ Hafiz Saeed tells ‘snowflakes’