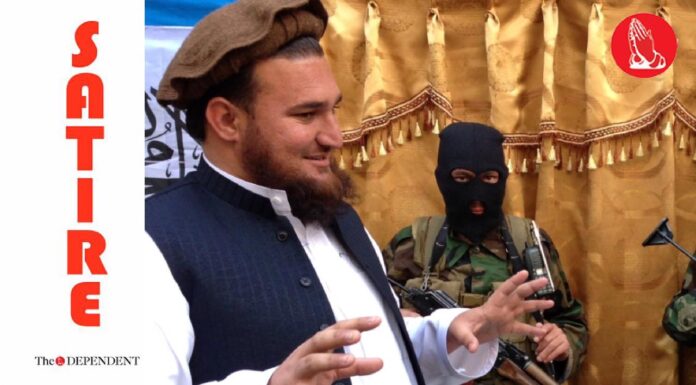 ISLAMABAD – Putting an end to weeks of speculation and uncertainty marring the state television, the federal government on Tuesday appointed Ehsanullah Ehsan as the PTV chairman. It has also been confirmed that Ehsan’s tenure will last for at least three years, or till he escapes the PTV building, whichever comes first.

The information ministry has sent out notification of Ehsan’s appointment as a PTV board member and the director of the state-run channel. The notification further states that the government has also approved the nomination of Ehsanullah Ehsan as the Pakistan Television Corporation (PTVC) Board Chairman in line with the Pakistan Television Corporation’s Memorandum & Articles of Association (Article 95 / 95A).

Talking to The Dependent, Federal Minister for Information and Broadcast Shibli Faraz lauded the appointment and highlighted the media pedigree of the newest PTV chairman.

“As the media in-charge of TTP, arguably the region’s most prominent organisation of the past couple of decades in terms of news generation, Mr Ehsan brings the highest profile possible to the helm of PTV,” Faraz said.

“Also, keeping up with the times, Mr Ehsan also has proven experience in generating viral content, with the TTP’s reach and hits second to none. PTV will be the greatest beneficiary of Mr Ehsan’s profile in hardcore, newsworthy content, which is followed with interest the world over,” he added.

The move comes a month after the PTV board charge-sheeted and suspended Managing Director Aamer Manzoor and a couple of weeks after the Islamabad High Court barred Ehsanullah Ehsan’s predecessor Naeem Bukhari from working as PTV chairman.

Government sources further confirm that after taking over PTV, Ehsanullah Ehsan will also be given charge of Pakistan’s contentious social media policy, with Shibli Faraz’s comments to The Dependent further confirming the new PTV chairman’s involvement in digital policymaking of the country.

On Monday, the government had reiterated its commitment to free media in Pakistan, as Foreign Minster Shah Mehmood Qureshi had informed The Dependent that the state was releasing Daniel Pearl’s kidnapper in solidarity with Pakistani journalists whose kidnappers also roam free.