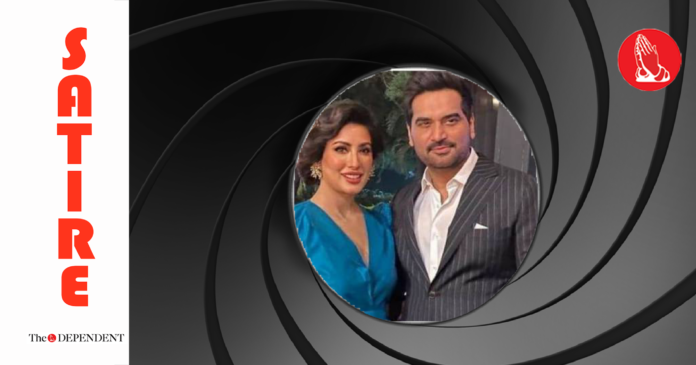 KARACHI – At a James Bond themed party hosted by British Deputy High Commissioner Mike Nithavrianakis on Friday, leading actor and producer Humayun Saeed made the major revelation that his long awaited film ‘London Nahi Jaunga’ isn’t a sequel to ‘Punjab Nahi Jaungi’ but a ‘crossover between the PNJ and 007 universes’.

Talking to the media at the event Humayun Saeed said that he didn’t want to give any spoilers and will only share the entire story of ‘London Nahi Jaunga’.

“It’s basically a story about James Bond, played by me of course, escaping the MI6 unreported and then moving to Faisalabad, and how both MI6 and CIA launch operations to bring him back to London, which he doesn’t want to do,” said the actor, going on to narrate the entire script, which is being coproduced by Eon Productions and ARY Films.

Humayun Saeed was doing a desi Bond dress rehearsal and campaigns for ‘London Nahi Jaunga’. Later talking to The Dependent, he revealed that his rendition of James Bond would be called Agent 420.

“You know, I’ll be bringing the best of the best home with James Bond. Yes. I’ll ace the role by playing the best James Bond actors and stories all in one package. I’m aging so well. I’m Sean Connery, Moore and Daniel Craig all rolled into one. I guess I comprehensively settled the ‘who should play the next James Bond’ debate”, he exclaimed, with a small jump and a finger gun gesture.

He regained composure to add, “James Bond on a budget is just what our economy could do with right now…and the ladies love it,” he added slyly with a brief side wink at costar MehwishHayat.

Looking slightly annoyed, before talking exclusively with The Dependent, Mehwish Hayat said she’s ecstatic about working on the crossover. “Especially since I am a feminist and have had to work with Humayun Saeed, and other women’s rights champions like Khalil-ur-Rehman Qamar,” she added, alluding to the star writer and the latest addition to the Bond screenwriting legends.

This scribe further asked if Humayun Saeed relished the chance to add a touch of Pakistani culture to James Bond.

“Well, they say when in Rome, do as the Romans do. But as you can see, right now, I’m in Karachi and dressed in a dapper, but, very western tux,” he said.